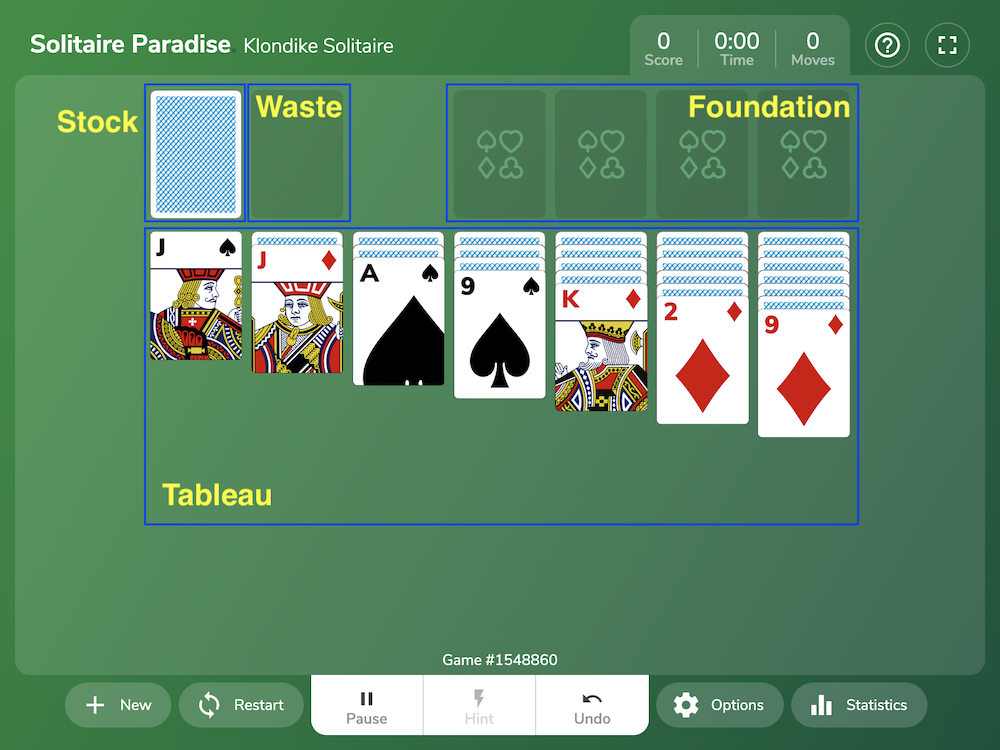 The tableau is where the majority of the gameplay happens. It typically has between 7 and 10 piles, but there can be less (e.g. 4 in Canfield Solitaire) or more (up to 13). Piles are typically shown fanned downwards.

The stock has the remaining cards that are not dealt to the tableau in the beginning. Cards in the stock are typically face-down. There is typically only one stock pile.

If the stock is turned over, cards are typically moved to the waste pile. This can be one at a time or multiple cards. There is typically only one waste pile.

Cells allow one card to be placed in them, usually any card. You can look at cells as maneuvering space.

If a solitaire game has a reserve, it is dealt some cards at the beginning. No additional cards can be moved to the reserve. Cards from the reserve can mostly be moved one at a time to the tableau or the foundations.

When playing online solitaire, each game will have different features. Let's look at the most common features.

A major implementation choice for solitaire games is how they deal the cards at the beginning of the game. The game developers can decide to do this deal completely at random, or only allow deals that are guaranteed to be solvable. For Freecell this is not so relevant, because 99.99% of FreeCell deals are solvable. For other games such as Klondike Solitaire, it can be desirable to only have winnable deals.

Most solitaire games have built-in statistics that keep track of all your played games. The statistic on which solitaire experts are focused most is the win rate. Win rate is defined as the number of games won divided by the total number of games played. This means that the win rate indicates the % of played games that were won. If you want to increase your win rate, make sure to check out our strategy guide. Many other statistics can be tracked, such as fastest time, fewest moves, highest score, etc.

When Autoplay is enabled, some obvious moves will be done automatically by the game. Many expert players like this feature because executing obvious moves is of course not the real challenge when playing solitaire. Examples of Autoplay are: