FreeCell Solitaire is a well-known solitaire game that requires more skill than luck. 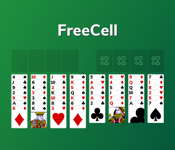 FreeCell is a solitaire card game with all cards visible at the start of the game, which makes it quite unique compared to other solitaire games.

How to play FreeCell

The deals are random, except if you pick a numbered deal. This FreeCell solitaire game has all the same deals as the original Windows game that came free with your computer (1-32000). The game numbers of the Windows game correspond exactly with this game.

The great thing about FreeCell is that almost every deal can be solved. From the original 32000 Microsoft deals, only deal number 11982 is unsolvable.

According to Solitaire Laboratory, 99.999% of FreeCell deals are solvable. Additionally, all cards are visible from the start, so there is less luck involved compared to Klondike Solitaire or Spider Solitaire. Use the following strategies and tips to win FreeCell every time you play:

The oldest ancestor of FreeCell is a game called Eight Off. It introduced the idea of temporary storage spaces for single cards, the so-called free cells. The rest of the gameplay is similar to FreeCell, but there are two major differences: Eight Off uses eight free cells and the tableau is built in-suit.

Based on Eight Off, C.L. Baker invented a game that was described by Martin Gardner in his June 1968 Mathematical Games column in Scientific American. This variation is now known as Baker’s Game and has four free cells, similar to FreeCell. The tableau is still built in-suit just as in Eight Off.

The first computer version of FreeCell was made by Paul Alfille in 1978, who changed Baker’s Game into FreeCell by introducing one change to the rules: the tableau is built by alternating color instead of by suit. For more information about how Paul programmed the first computer version of FreeCell in the TUTOR programming language for the PLATO educational computer system, you can read an interview published here.

FreeCell is now one of the three most popular solitaire variants (together with Klondike Solitaire and Spider Solitaire), mostly because it was bundled with Microsoft Windows 95 and later, giving millions of people free access to the game.

How to set up and deal FreeCell?

Why can't I move stacks in FreeCell?

The default rule in FreeCell is that you can only move one card at a time. However, by using the free cells and empty tableau columns, you can move card sequences at the same time. Computer versions of FreeCell automatically determine whether moving a certain stack of cards is allowed, making it much more convenient to play FreeCell on a computer compared with physical cards. The amount of cards you can move at the same time is calculated as follows: (1 + number of empty free cells) * 2 ^ (number of empty tableau columns).

How many FreeCell games are there?

A deck of cards can be shuffled in 52! ways (52 factorial), which is about 8x10^67. Some of these deals are similar (e.g. swapping two columns), resulting in around 1.75x10^64 different deals. For a single person, it is impossible to play all of them in a lifetime. Assuming a deal takes on average 5 minutes to complete, 1 billion people playing non-stop for 100 years would still only be able to complete 1.05x10^16 different deals.

Are there unwinnable FreeCell games?

Yes, there are unsolvable FreeCell deals! From the original 32,000 deals, only deal #11982 is unsolvable. From the first 1 million game numbers, 8 are unsolvable. In general, a statistical study by Don Woods in 1994 concluded that 99.999% of deals are solvable.

FreeCell can be played in all modern browsers, on all device types (desktop, tablet, mobile), and on all operating systems (Windows, macOS, Linux, Android, iOS, ...).

Please let me know why you don't like FreeCell