Spider Solitaire is a fun challenge. Create columns of 13 cards in the same suit. 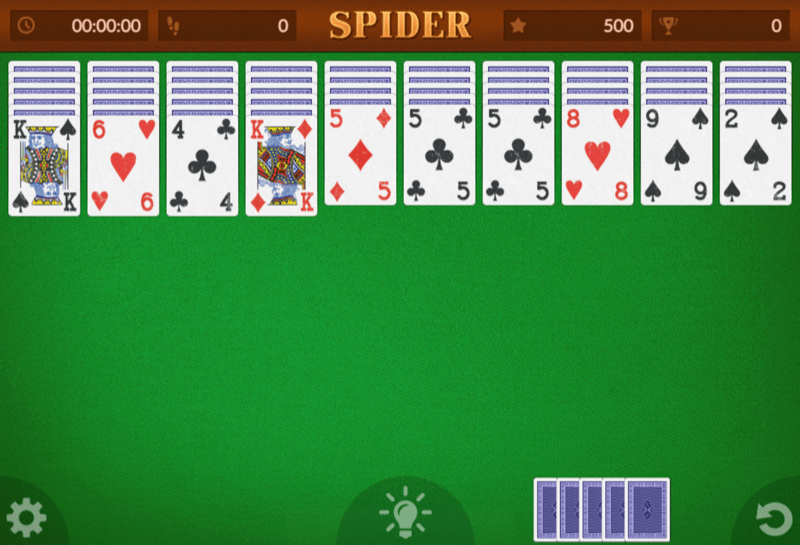 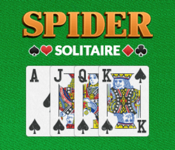 Spider Solitaire is easily one of the most popular solitaire games on the internet. It is also an immensely challenging free online solitaire game, that is assuming you elect to play with 4 suits! However thanks to its simple rules it is quite easy to learn how to play even if it requires some serious thought to try and win a round.

Spider solitaire requires patience, logical thinking and luck. When playing spider solitaire on its most difficult setting, you will have to quit and restart many, many times. However when you do finally win, it's a great feeling!

The goal of this solitaire game is to remove 8 columns of cards at the bottom, each descending from King to Ace in a single suit. When a column like this is created it is automatically removed from the game freeing up space and opening up cards for you to continue.

Spider Solitaire is played with two decks of 52 cards with all jokers removed.

You will see at the start of the game that 10 columns are dealt at the top, with only the top card shown. You must rearrange the deal to uncover the cards underneath.

The rest of the cards remain in the deck to be used later.

The basic rules of spider solitaire are as follows. A single card can be moved onto a column if it is one lower than the card it is covering (e.g. A Queen of Hearts can cover any Red King or Black King). When trying to move a column of cards, they can only be moved if they are all in the same suit. For this reason wherever possible it is best to create descending columns of the same suit.

If a column is empty you can place anything on it. It is vitally important to use this well, as freeing up other options is exactly what this card game is about.

You can deal more cards to the layout by clicking the card located in the bottom right. These cards will cover all 8 columns, forcing you to rearrange them so you can reach any grouped columns you have created and arranged previously.

The four suit version of Spider Solitaire is easily one of the most of the challenging solitaire games out there and simply put not every game can be won. You always need some luck. The two suit and one suit versions are far easier and winning is much more common.

With the tips below we aim to show you not only how to play but also how to win this particularly challenging card game.

You start with 500 points. Each move (or turning the stock) will cost you 1 point. When a full run is moved to the foundation you score 100 points.

How to set up Spider Solitaire?

How to win at Spider Solitaire?

Spider solitaire is notoriously hard to win, especially the 4 suits version. Make sure to group cards as much as possible before dealing extra cards. Be careful with placing Kings on empty columns, because they will block the column until it is removed by creating a full sequence. Try to create empty columns by playing from the smaller piles first.

How is Spider Solitaire scored?

At the beginning you get 500 points. 1 point is reduced for each move. Creating a full sequence will earn you 100 points.

How to play Spider Solitaire with one deck?

Spider solitaire with one deck is called Spiderette. It follows the same rules as Spider Solitaire, except for the deal. In Spiderette, the tableau has seven piles which are dealt as in Klondike Solitaire: the first pile gets one card, the second pile two cards, and so on. All other rules are the same.

We hope this guide will help you understand the rules of Spider Solitaire. Enjoy playing!

Spider Solitaire can be played in all modern browsers, on all device types (desktop, tablet, mobile), and on all operating systems (Windows, macOS, Linux, Android, iOS, ...).

Please let me know why you don't like Spider Solitaire