Forty Thieves Solitaire is one of the most challenging and skillful solitaire games ever made. 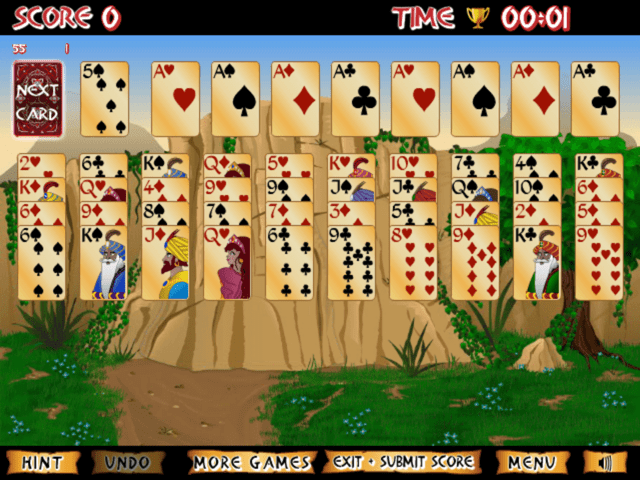 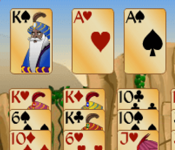 Forty Thieves Solitaire is a popular and challenging solitaire card game. With less than a 10% chance of winning, even if you play well, we find this particular solitaire game very satisfying when we win! For those who are interested in a bit of trivia it's also sometimes known by the names Big Forty, Napoleon at Saint Helena and Le Cadran.

How to play Forty Thieves Solitaire

In Forty Thieves Solitaire the goal of the game is to move all the cards to the 8 foundation piles located in the upper right corner.

Forty Thieves is a card game played with two decks of cards with all jokers removed. 40 cards are dealt face-up in columns that consist of four cards. All the remaining cards are left in a waste pile that can be used later. As two decks are used you will often notice duplicate cards after setting-up.

The foundation piles are built in suit in an ascending order from Ace to King. Each foundation starts with an Ace of a particular suit and rises up to the King of that suit. So after an Ace of hearts is put into a foundation pile, it would have to be followed by the two of hearts and so.

You can use the middle 10 piles to hold the cards temporarily while you build up the cards in the foundation piles. You may only move one card at a time, and you can only move a card to another pile if it is one lower and in the same suit. For example you can move a 10 of clubs only onto a Jack of clubs.

When a column is empty you can move any single card onto it to start it off.

If you cannot make a move you can turn over a new card by clicking on the facedown deck in the top left of the game screen. You can turn over a single card at a time and put them whenever you decide you want to or of course if there are no possible moves for you. Of course you can only use the top card of the waste pile.

You are only allowed to pass through the waste pile once, so resetting the deck is not allowed. This makes Forty Thieves Solitaire quite difficult.

Don't forget to ask for a hint during the game, it can help to spot possible moves you might have missed.

You will have to restart if you have used all the stock cards and cannot put all the cards on the foundation.

After completing a round, there are two bonuses: time bonus and round bonus.

The time bonus depends on how quickly the round is completed. During a round the current time is indicated at the right top of the game, together with the current bonus (gold / silver / bronze). The scores are as follows:

The round bonus equals Round Number × 1,000 points.

How to win Forty Thieves Solitaire

Right, so now you've got your head around the rules, let's help you win!

Looking for an easier variation of Forty Thieves? Give Thieves of Egypt a try!

40 Thieves is definitely one of the trickier solitaire games out there, but it's immensely rewarding when you win.

Forty Thieves Solitaire can be played in all modern browsers, on all device types (desktop, tablet, mobile), and on all operating systems (Windows, macOS, Linux, Android, iOS, ...).

Please let me know why you don't like Forty Thieves Solitaire