This version of pyramid solitaire is the most popular of our free solitaire games. 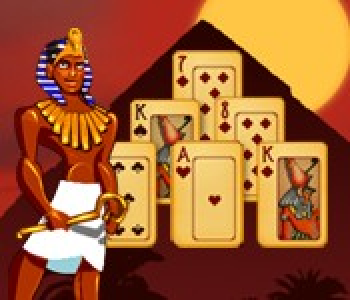 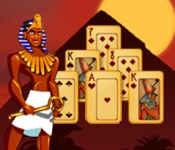 The objective in Pyramid Solitaire is to remove all cards in the pyramid by pairing cards that add up to 13.

First, 28 cards are dealt face-up in the shape of a pyramid, with the cards partially overlapping. The remaining cards are put face-down in the stock.

If you are still unsure about which moves are allowed, follow the in-game tutorial.

Pyramid Solitaire Ancient Egypt has several scoring rules that reward quick play and good strategy. Complete different rounds after each other to improve your score.

Note that using the undo button does not impact your score.

There are many different versions of Pyramid Solitaire. Variations allow to reset the stock and/or they only have one waste pile. There are no official or right rules for Pyramid Solitaire, but we prefer the rules we used for our implementation because they are a good combination of skill and luck.

Pyramid Solitaire was used as inspiration for Giza Solitaire. If you like playing Pyramid Solitaire Ancient Egypt, you can also have a look at TriPeaks Solitaire, which is also in the Adding & Pairing solitaire games category.

Pyramid Solitaire Ancient Egypt can be played in all modern browsers, on all device types (desktop, tablet, mobile), and on all operating systems (Windows, macOS, Linux, Android, iOS, ...).