Relax and simply remove the cards that are one higher or lower than your current deck card. 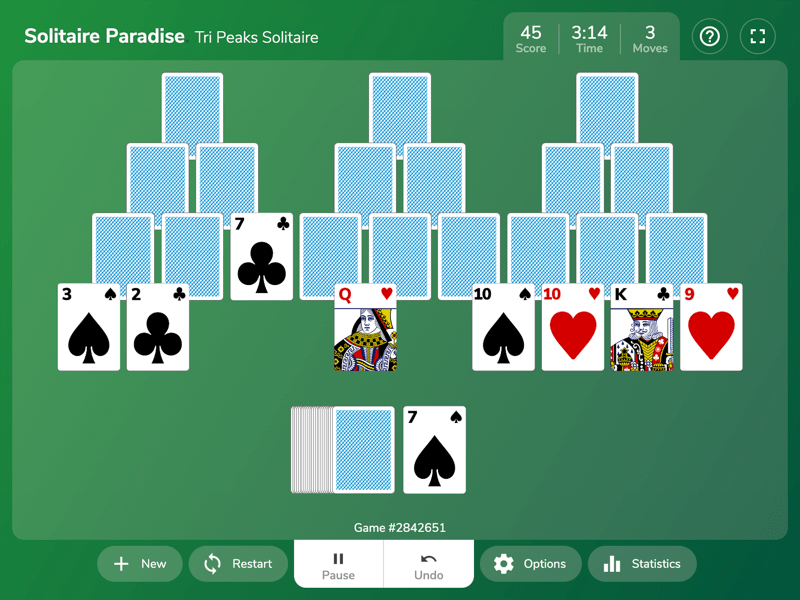 How to play Tri Peaks Solitaire

You have to remove all the cards in the three peaks from the tableau. To remove a card, simply select one that is either one higher, or one lower than the deck card at the bottom. This combination of Golf and Pyramid Solitaire has simple rules!

The top card of the stock is turned face-up and placed next to the stock. This card is called the “deck card” or “waste pile”.

A card in the tableau can be removed if it is a rank higher or lower than the current deck card (the top of the waste pile). The suit of the cards does not matter. Just click the card you want to remove and it will move to the waste pile. You can remove multiple cards from the tableau by clicking them one by one.

When a face-down card in one of the three peaks does not have any cards on top of it anymore, it will turn face-up.

If there are no more moves available, click the stock to turn the top card of the stock face-up and move it to the waste pile. This becomes the new deck card. There is no re-deal of the stock.

Tri Peaks is about more than just clearing the tableau. It offers a number of score bonuses while you play and for finishing a round, which will help you on the score board. If you remove multiple cards in a row from the layout without turning over the stock, your score per card increases.

Unlike many other solitaire games, Tri Peaks is rather new. According to Wikipedia, it was invented in 1989 by Robert Hogue and was originally part of Windows Entertainment Pack 3. It first appeared as a computer game, and it continues to be popular.

Tripeaks is similar to Golf Solitaire, in which you also have to select cards that are one rank higher or lower, although the tableau has a different layout. It also has similarities with Black Hole, which follows the same rules for removing cards but has a different layout similar to La Belle Lucie. While the gameplay of Pyramid is different, its layout and deal are relatively similar to Tri Peaks.

How to set up Tri Peaks?

Lay out three adjacent peaks of six face-down cards to the tableau. On top of the three peaks, deal ten cards face-up. The rest of the deck goes face-down into the stock.

How to play TriPeaks solitaire with a deck of cards?

Take a regular deck of cards with 52 cards and remove the jokers. Deal three peaks of six cards face-down onto a table. The top row of a peak has one card, the second row has two cards, each of which partially overlaps the top card, and the third row has three cards, which also partially overlap the row above. Deal an additional 10 cards face-up. Put the rest of the deck below the three peaks and turn the top card of the stock to form the waste pile. You can now start playing Tri Peaks with a physical deck of cards!

How many cards are used in Tri Peaks Solitaire?

Tri Peaks is played with one regular deck of playing cards, so 52 cards in total.

How many levels are there in TriPeaks Solitaire?

You can play as many rounds of Tri Peaks as you want. Each round will have a different deal so there is actually an endless possibility of levels in Tri Peaks.

Can you play solitaire TriPeaks offline?

Yes, there are many possibilities to download Tri Peaks so you can play it offline. You can also play it with a real deck of cards.

Tri Peaks Solitaire can be played in all modern browsers, on all device types (desktop, tablet, mobile), and on all operating systems (Windows, macOS, Linux, Android, iOS, ...).

Please let me know why you don't like Tri Peaks Solitaire