Addiction Solitaire is an ... addictive solitaire game, its name speaks for itself! 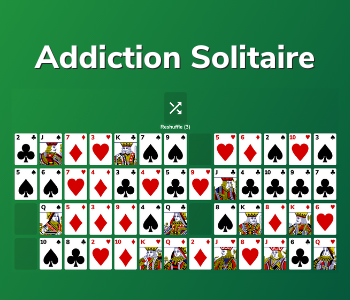 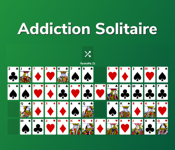 Arrange each of the four rows into a sequence of twelve cards of the same suit from Two to King, with the last space in the row empty.

All 52 cards of one deck are dealt to 4 rows of 13 cards each. The Aces are removed creating 4 gaps.

Addiction Solitaire was originally developed by GameHouse for Yahoo! Games.

The main strategy in addiction solitaire is deciding where you want to create a space (start with the leftmost column), and then figure out the required moves to create that space. Start with the card currently occupying space you want to free. There is only one place this card can go: to the right of the card of the same suit and one rank lower. If this card has a free space to the right of it, you can immediately move it and you are done. If this does not have a free space to the right of it, you now have to figure out where the card to the right can be moved. Repeat this process until you can actually move a card, and work your way backwards until you can free the space you initially had in mind.

When you have created a space in the leftmost column, think carefully about which Two you are going to put there. Ideally there are already some correctly ordered cards to the right.

To avoid getting stuck and having to reshuffle, always avoid making gaps to the right of the Kings. The best location for a King is in the rightmost column, because you will never create a gap to the right of it.

Avoid finishing one row much in advance of the others, because it will create a blank space you cannot use anymore.

Addiction Solitaire can be played in all modern browsers, on all device types (desktop, tablet, mobile), and on all operating systems (Windows, macOS, Linux, Android, iOS, ...).

Please let me know why you don't like Addiction Solitaire