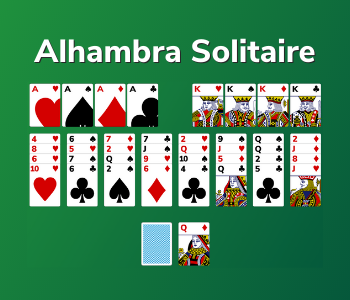 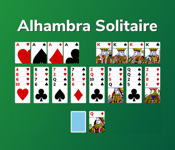 Very difficult two deck solitaire game, in which cards from the reserve can be moved to the waste as in Crazy Quilt Solitaire.

Alhambra Solitaire is named after The Alhambra, a famous medieval Palace and Fortress in Granada (Spain). Being a virtually impenetrable fortress, it makes sense that an incredibly difficult game is named after the fortress.

Alhambra Solitaire can be played in all modern browsers, on all device types (desktop, tablet, mobile), and on all operating systems (Windows, macOS, Linux, Android, iOS, ...).

Please let me know why you don't like Alhambra Solitaire