Alternation Solitaire is a solitaire game with a unique setup. The rows of cards in the tableau are alternating between face-up and face-down. This definitely makes it an interesting game to play, however the chance of winning is pretty low. 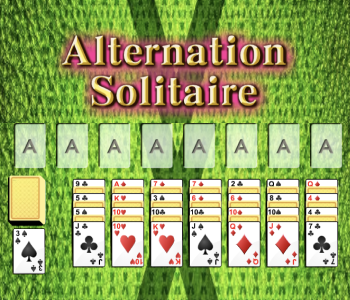 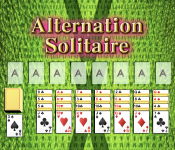 The goal in Alternation Solitaire is to move all 104 cards to the eight foundations.

Each of the seven tableau piles is dealt seven cards. The cards in a pile are dealt alternating between face-up and face-down, which explains the name of the game.

The rest of the cards goes face-down in the stock.

The tableau is built in descending order and by alternating colors (e.g. a red 9 can go on a black 10). Correctly ordered sequences of cards can be moved as a group. When face-down cards don’t have any cards left on top of them, they are flipped automatically. Empty tableau piles can only be filled with a King or a sequence of cards starting with a King.

You can click the stock to flip a card to the waste pile. Cards from the waste pile can be moved to the tableau or to the foundation. There is no redeal of the stock once it runs out.

The foundations are built by suit in ascending order, going from Ace to King.

Alternation Solitaire can be played in all modern browsers, on all device types (desktop, tablet, mobile), and on all operating systems (Windows, macOS, Linux, Android, iOS, ...).

Please let me know why you don't like Alternation Solitaire