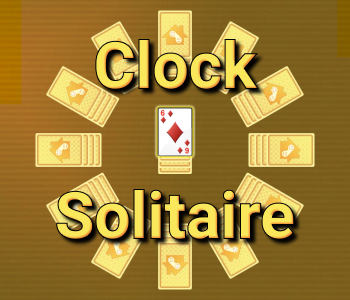 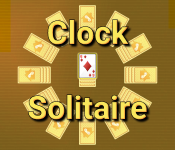 Clock Solitaire (also known as Clock Patience) is a quick card game that is completely based on luck. Whether you complete a deal doesn’t depend on skill, just on luck.

The goal in Clock Solitaire is to turn all cards face-up, and arrange them according to their rank.

You can only move a card to the pile corresponding with its rank, similarly as how you read a clock. The Ace goes to 1, the two to 2, …, the Queen to 12. Kings go onto the pile in the middle. This means you don’t have a choice to which pile you move a card, the game is purely mechanical.

If you move a card to a pile, it will be placed face-up at the bottom of the pile, and the top card of the pile will be revealed.

You win the game if all cards are face-up and in the pile corresponding to their rank.

According to Eric W. Weisstein at Wolfram Research, chances of winning a deal in Clock Solitaire are exactly 1 out of 13.

The Clock Solitaire version on our website is developed by NovelGames.

Clock Solitaire can be played in all modern browsers, on all device types (desktop, tablet, mobile), and on all operating systems (Windows, macOS, Linux, Android, iOS, ...).

Please let me know why you don't like Clock Solitaire