King Albert solitaire is named after Albert I of Belgium, the former king of Belgium. It's a very difficult game to win, so don't lose your spirit when you cannot complete a deal. 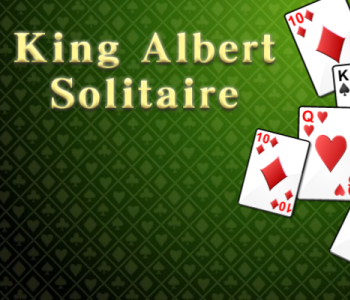 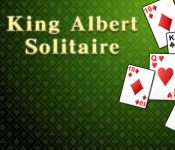 This solitaire game is named after Albert I of Belgium, the former king of Belgium that is also known as the Knight King.

Like in most other solitaire games, the goal in King Albert solitaire is to move all cards to the foundations. They are located at the top left.

The nine tableau piles are all dealt a different amount of face-up cards, going from one card to the first pile to nine cards for the last pile.

The remaining seven cards go face-up in the reserve at the bottom. This reserve is also referred to as the Belgian reserve.

Cards in the tableau are built in descending order, and by alternating colour. Only one card can be moved at a time. An empty tableau pile can be filled with any card.

The cards in the reserve can be moved to the tableau or to the foundations.

The foundation piles are built in the same suit and in ascending order, from Ace to King.

King Albert Solitaire can be played in all modern browsers, on all device types (desktop, tablet, mobile), and on all operating systems (Windows, macOS, Linux, Android, iOS, ...).

Please let me know why you don't like King Albert Solitaire