Kings & Queens Solitaire Tripeaks is a fun tripeaks with lots of game features to discover. You earn coins and stars for each level you complete, depending on your score. Discover all boosts: 4-card-combo, joker cards, +2 and +3 cards, magnet, jackpot, and dice booster. 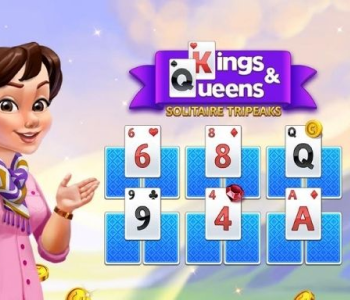 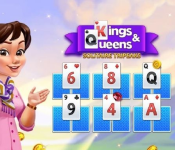 The goal of Kings & Queens Solitaire Tripeaks is to remove all cards from the field without using up your stock.

Players are presented with an arrangement of cards - this is called the tableau. This changes throughout the levels, keeping you on your toes as you navigate through the game.

NB: You cannot tap on a card with the same ranking!

When no more moves are available, you must take a card from the stock at the bottom (bundle of cards facing downwards next to the waste pile). If by the time you have used all the cards from the stock but still haven’t cleared the board, you lose the level. You can choose to restart the level but you will lose a heart in doing so. However, you can also choose to continue the level by paying 100 coins to add five extra cards to the stock.

At the beginning of playing, players will have an unlimited amount of hearts to help you learn the game. Once the timer runs out the maximum number of hearts you can hold at one time is five hearts. Hearts refill at a rate of one every 30 minutes.

You can earn coins and stars for each level, depending on your score.

Boosts are unlocked once you reach level 5. Here are descriptions of how each boost affects gameplay.

Kings & Queens Solitaire Tripeaks belong to the category of solitaire games and is developed by Clever Apps.

Kings & Queens Solitaire Tripeaks can be played in all modern browsers, on all device types (desktop, tablet, mobile), and on all operating systems (Windows, macOS, Linux, Android, iOS, ...).