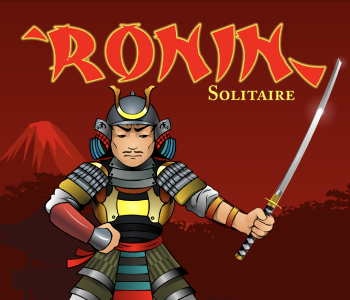 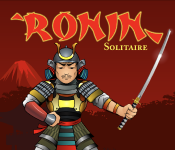 Ronin Solitaire is a game with rules that are similar to Canfield Solitaire (draw 3). This means it is quite a difficult game to complete.

The goal in Ronin Solitaire is to move all cards to the foundations, creating four piles of the same suit in ascending order.

First, one card is dealt to the first foundation. Then 13 cards are dealt to the reserve pile on the left, all face-up unlike Canfield solitaire in which the cards in the reserve are face-down. Finally, each of the four foundation piles is dealt one card.

The rank of the card dealt to the first foundation determines the starting rank of the foundation piles. All other piles have to start with a card of this rank as well.

Turn the stock to reveal three more cards at a time. Once you circle through the stock, you can reset it as many times as you want.

If you get stuck, you can press the undo button to go back as many moves as you want.

Unlike in the regular Canfield solitaire game, you have the option of shuffling the deck when you get stuck. This can only be done three times per game.

You start a new deal with a score of -50. If you move a card to the foundations, you earn 5 points. Shuffling the deck will cost you 30 points.

Click and drag a card to move it to another pile. Double clicking a card will move it to the foundation if it is a valid move.

The name of this game is related with the Japanese samurai culture. This is also why the theme of this game is inspired by samurais. From the 12th to the 19th century, a ronin was a samurai without a master. You have to gather points to restore all the samurai privileges of the ronin.

Ronin Solitaire is developed by DoubleGames.

Ronin Solitaire can be played in all modern browsers, on all device types (desktop, tablet, mobile), and on all operating systems (Windows, macOS, Linux, Android, iOS, ...).

Please let me know why you don't like Ronin Solitaire