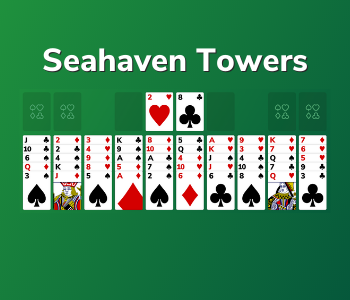 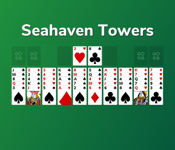 Move all cards to the 4 foundation piles up in suit from A to K in this variant of FreeCell. The 4 free cells can hold any card. You can build cards down by suit on the tableau. You can also move multiple cards already in sequence. Empty spaces can be filled with any card or a sequence.

The goal of Seahaven Towers is to move all the cards from the tableau to the foundations.

Seahaven Towers is played with one deck (52 cards). The tableau has ten piles that are each dealt five face-up cards. The remaining two cards are placed in the middle two of the four cells. The four foundation piles are empty at the start.

Seahaven Towers can be played in all modern browsers, on all device types (desktop, tablet, mobile), and on all operating systems (Windows, macOS, Linux, Android, iOS, ...).

Please let me know why you don't like Seahaven Towers