Solitaire Tripeaks Garden follows the rules of the original Tripeaks game, but adds a lot of unique game elements to it. Earn stars and coins by completing levels. The coins give you access to special features such as Freedom cards and extra stock cards. 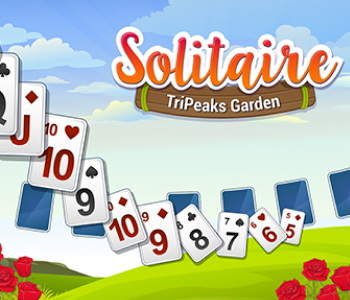 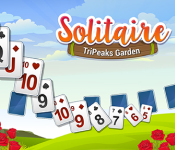 The goal of Solitaire Tripeaks Garden is to remove all cards from the tableau without using up your stock cards. Try and beat the clock for extra stars!

The layout of the tableau changes throughout the levels, with some being harder than others, keeping you on your toes.

Face-down cards in the layout will be automatically revealed once all cards on top of it are removed.

You cannot reset the stock, so if the stock is empty and you run out of moves you lose the level. Alternatively, you can buy extra cards in bundles of 5. The first set of 5 extra cards you buy will be free, after that you will need to pay coins each time you buy extra. If you’re really struggling, look out for cards wiggling - these indicate available moves.

Players can earn a maximum of three stars per level, and this is dependent on their performance:

You can see the progress of your streaks at the top of the game screen. There are three checkpoints (2 coins and 1 star). Play 5 cards in a row to be awarded one checkpoint. This means to score the Streak star you will need 3 x 5 consecutive taps. You would also get the star with 15 consecutive taps! Streaks can also award rewards such as coins, bonus cards or wild cards.

Another point to mention here is that the coins awarded per card increases if you’ve got a streak going. The number of coins awarded will go back to 1 upon resetting the streak.

Playing and tapping on cards will earn you coins, though there are other ways to build up your coin score. Every 60 minutes players get 100 free coins - click on the button in the top left of the level select screen to collect this. In addition, every calendar day players are gifted one +5 extra cards (into the talon when you run out of cards) as well as 350 bonus coins. This resets at 00:00 every day, so don’t forget to retrieve yours!

The coins earned throughout the game can be used to purchase various boosts, special moves and in-game items that players unlock as they play the game. Let’s take a look at some examples.

Solitaire Tripeaks Garden can be played in all modern browsers, on all device types (desktop, tablet, mobile), and on all operating systems (Windows, macOS, Linux, Android, iOS, ...).

Please let me know why you don't like Solitaire Tripeaks Garden