Terrace Solitaire is a unique game in which you get to decide the first foundation card yourself, and foundations are not built by suit but by alternating color. 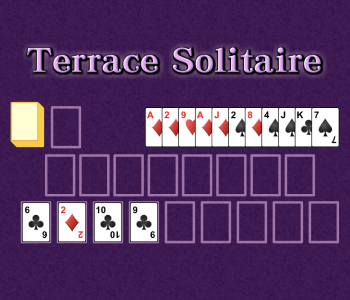 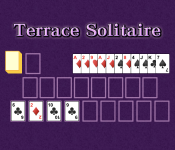 The goal is to move all cards to the eight foundation piles, which are built up in ascending order and by alternating color, starting from the chosen foundation card.

The foundation piles start empty, while the first four tableau piles are dealt one card each. The reserve has 11 face-up cards. The rest of the cards goes face-down in the stock.

After you make your choice, additional cards are dealt so that each tableau pile has one face-up card.

The tableau is built in descending order and by alternating colour. You can only move one card at a time. You can put a King on an Ace if needed. Empty tableau piles can only be filled with cards in the discard pile, not with cards from other tableau piles or the terrace.

The cards in the reserve pile (the terrace) can only be moved to the foundations.

Other games in the family of Terrace solitaire games are:

Terrace Solitaire can be played in all modern browsers, on all device types (desktop, tablet, mobile), and on all operating systems (Windows, macOS, Linux, Android, iOS, ...).

Please let me know why you don't like Terrace Solitaire