Based on FreeCell but with 8 cells and you build sequences in suit instead of by alternating color. 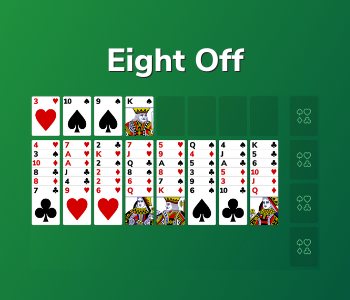 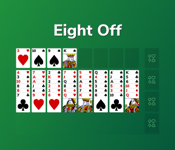 How to play Eight Off

Remove all the cards onto the foundations starting with the Ace.

The layout used by Eight Off is similar to FreeCell, except that you can use 8 free cells to hold your cards instead of 4. At the start of the game, 48 cards are dealt face-up into 8 tableau piles, 6 cards to each pile. The remaining 4 cards are dealt to the first 4 cells, one to each. The foundation piles are empty at the start.

As Eight Off introduced the concept of temporary storage spaces for single cards (free cells), Eight Off is considered to be the oldest ancestor to FreeCell. Another game based on Eight Off is Baker's Game.

Eight Off can be played in all modern browsers, on all device types (desktop, tablet, mobile), and on all operating systems (Windows, macOS, Linux, Android, iOS, ...).

Please let me know why you don't like Eight Off