Build up the foundations and try to remove all the cards in this fan type solitaire game. 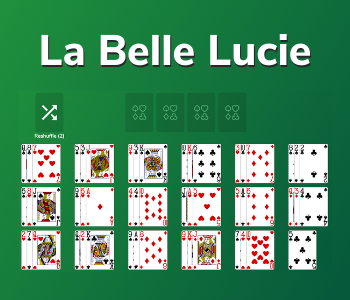 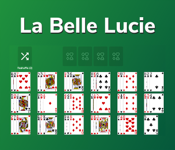 Move all cards to the foundations by suit in ascending order.

All cards are dealt to the tableau. The first 17 tableau piles get 3 cards each and the last pile gets one card.

On the tableau you can move the top card onto another top card by suit in descending order. Empty spaces are not filled. If you are stuck, you can reshuffle the cards. You can do this twice per game. The foundations are built up in suit, from Ace to King.

Trefoil Solitaire follows mostly the same rules as La Belle Lucie, but makes the game slightly easier by starting with the Aces already on the foundations.

La Belle Lucie can be played in all modern browsers, on all device types (desktop, tablet, mobile), and on all operating systems (Windows, macOS, Linux, Android, iOS, ...).

Please let me know why you don't like La Belle Lucie