Variation of Spider Solitaire played with one deck only, making it much quicker to complete. 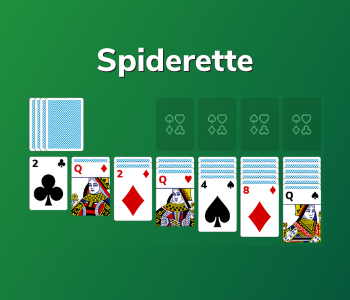 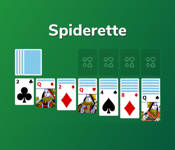 Remove all cards from the tableau by building four in-suit sequences from King to Ace.

Unlike Spider Solitaire, Spiderette only uses one deck of cards (52 cards) instead of two decks. The tableau has seven piles which are dealt as in Klondike Solitaire: the first pile gets one card, the second pile two cards, and so on. The top card in each pile is face-up. The remaining cards go face-down into the stock, which is made up of three groups of seven cards each, and one group of three cards. The foundation has four piles which are empty at the start.

You start with 500 points. Each move (or turning the stock) will cost you one point. When a full run is moved to the foundation you score 100 points.

Spiderette was first mentioned in 1949 by Albert H. Morehead and Geoffrey Mott-Smith in their book “The Complete Book of Solitaire & Patience Games”. Spiderette is believed to have been well-known before that time.

Spiderette is a difficult game which can be won 5-10% of the time. Follow the tips below to increase you chances at winning a Spiderette deal.

Spiderette Solitaire is a single deck variation on Spider Solitaire, played with only one deck instead of two, making it much quicker to complete a game compared to the original Spider Solitaire.

How to play Spiderette Solitaire?

The goal in Spiderette is to remove all cards by creating full runs from Ace to King in the same suit. The tableau is built down by rank (irrespective of suit). In-suit sequences which are correctly ordered can be moved together. Any card (or sequence of cards) can be moved to an empty spot. Turning the stock adds one face-up card to each tableau pile (only allowed when there are no empty piles). Full runs from Ace to King are removed from the tableau automatically.

How to beat Spiderette Solitaire?

Improve your chances at winning a Spiderette deal by following these tips: build in-suit when you can to avoid blocking cards, build with higher rank cards first to create additional opportunities for lower ranked cards, focus on getting empty columns and treasure them as they are key to winning a game, and use the undo button to determine which move to make next.

Spiderette can be played in all modern browsers, on all device types (desktop, tablet, mobile), and on all operating systems (Windows, macOS, Linux, Android, iOS, ...).

Please let me know why you don't like Spiderette