Garden Tales is a vibrant and vivid puzzle game based on matching tiles. The free-to-play game features a whole bunch of fun gameplay mechanics with beautiful artwork to bring hours of fun! 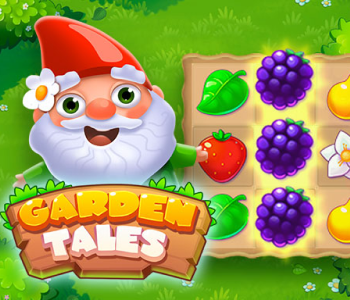 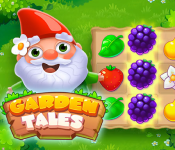 The goal of Garden Tales is to swap flowers, fruit, and vegetables to make matches of three or more. Complete various objectives within the move limit to clear the level. Earn points and coins to unlock additional bonuses and cool boosts throughout the map.

Garden Tales is based on swapping tiles to make matches. The tiles can hold plants such as fruits, flowers and botanics, creating a beautiful garden setting for gameplay.

The player has a limited number of moves to achieve various objectives, which are shown at the beginning of a level - objectives must be completed in order to proceed to the next level. Level objectives are quite varied; some require to clear a certain number of a certain fruit, while others may ask for dirt to be removed (more on this below). A counter at the top of the game board shows the remaining objective items.

If a player is unable to complete an objective within the move limit, they will fail the level and lose a life. Players can hold a maximum of 15 lives at a time. To see how many lives you hold, navigate to the main map screen and see the heart icon in the upper left corner. Note: If you’re really stuck, watch out for hints (wobbling plants)! You can also buy an additional five moves for a whopping 2400 coins - the option shows up when you’re close to running out of moves.

Valid moves are those that make horizontal or vertical matches (but not diagonal) and must consist of at least three matching items (flowers, fruit, or vegetables). When matched, the items within the tile are cleared away.

A maximum of three stars can be collected for completing each level. A gauge at the top of the screen shows the progress in obtaining three stars. Progress increases when collecting points, which are awarded for each match depending on the number of items matched.

The controls for Garden Tales are straight-forward. Simply click on a tile to select it for swapping, then click on another to swap the two. Note: Only adjacent tiles can be swapped with each other!

Garden Tales features various special tiles which can activate unique moves when matched, keeping the game interesting and exciting. The following are some examples.

Super Plants are obtained through matching 4 tiles (one of the middle two plants will transform into a super plant). They are indicated by a white ring around the plant. The ring will either be horizontal or vertical, depending on the orientation of the original 4 tiles.

When a super plant is matched, all plants in its row or column (depending on whether the ring is vertical or horizontal) are cleared and destroyed. Players will receive bonus points for each plant destroyed.

Another note, you can swap two super plants that have the same band (ie. two plants with horizontal rings) to form a ‘t-shaped’ super plant. This super plant will immediately explode and destroy all plants in its row and column.

Rainbow Bombs (or Gnome Bombs) are obtained through matching 5 tiles (the center plant transforms into a rainbow bomb).

Swap this with any plant to destroy all tiles containing that plant. For example, when swapping a rainbow bomb with an apple, all apples on the game board at that moment will be cleared. The player will gain all extra points.

Another powerful combo is swapping a rainbow bomb with a super plant - this will clear the entire game board!

These occur randomly and contain treasure within. Make a match next to the treasure chest to open these.

Match the plants within these to remove the dirt. Removing all tiles with dirt is often a level objective.

Some levels require players to collect fruit baskets. To collect a basket, match and clear the plants beneath the basket to bring them down towards the arrows at the bottom of the game board. When the basket reaches the bottom tile, it will fall through and be collected.

Some plants are stuck in ice blocks and cannot be matched/swapped until the ice is broken.

To break the ice, make a match next to the block - some blocks are harder than others and require more than one match!

Plants in chains can be matched and swapped.

Plants in these cannot be swapped - match the tile to break it free.

Players will also unlock various boosts and in-game items as they progress through the game. For example, at level 2 players will unlock the boost Swap. This allows the player to swap any two plants on the game board no matter how far away the plants are. Tip - use this to position plants for matches of five!

Another boost is the spade. Use this to instantly remove a plant or a blocker. Save and use these towards the end of a level when you only need one or two more tiles to complete the level objective.

Garden Tales features a bunch of content for players to unlock as they work through the beautiful map of levels. To maneuver around the map, simply click and drag in the direction you want to move the map in. Watch out for bonus prizes scattered around the map - for example, collect a certain number of stars to unlock treasure chests.

Obtain achievement gifts by completing three levels in a row. This gives you the opportunity to pick one of three mystery presents - you can open more with watching videos. The mystery presents contain a range of prizes, including extra coins and boosters.

The game also features daily rewards, challenges and missions. Play every day for new gifts, and consecutive logins will give bigger prizes. Daily challenges and missions are further opportunities to earn coins and boosts. Players will only have one attempt at the daily challenge, which is a bonus level with (at times) harder objectives. Daily missions can be accessed by clicking on the ‘Daily’ tab by the right hand side of the map screen. Each day there are three new missions for players to complete and earn rewards. On finishing all three missions players are awarded with a mystery present.

Tip: Remember to claim your bounty from missions!

Remember to check the prize wheel too - every now and then players will get a free spin at the wheel to earn coins and items!

Garden Tales is developed by SoftGames. Garden Tales belongs to the category of classic games.

Other match 3 games on our website are Jewel Quest and Treasures of Atlantis.

Please let me know why you don't like Garden Tales