Swap adjacent tiles to match 3 or more tokens. This will make them disappear and turn their background gold. Complete a level by turning every tile to gold. 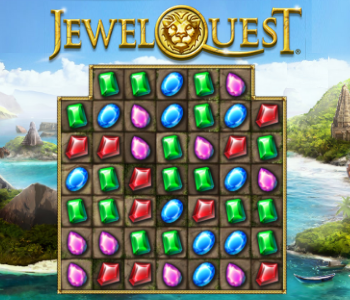 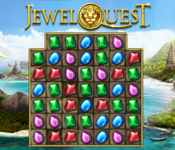 Jewel Quest is a classic match 3 puzzle game developed and published by iWin. The antecedent of many subsequent Jewel Quest games, this matching puzzle game is widely popular with hours of fun guaranteed. Another match 3 game on our website is Bubble Spinner.

The goal of Jewel Quest is to swap adjacent tiles with each other to create lines of three or more identical relics. Matched jewels will disappear with relics above them falling into their places. The background of matched tiles will also turn into a gold color. Turn every tile on the board to gold to pass the level!

The match 3 game is played on mysterious jewel boards filled with treasures and jewels, as well as precious buried artefacts. The jewels are presented in an array of different colors and shapes. Remove them from the board by swapping tiles to make matches of three, which would also cause the tile to turn to gold. You can only proceed to the next level by turning all tiles on the board to gold!

Beware - this must be completed within two minutes! A timer at the bottom of the game board indicates the amount of time left. Once two minutes is up the game is over and players must start the level again. As you progress throughout the game the amount of time given increases gradually through the levels. Clicking on the 'Pause' button at any moment allows you to pause the timer without any penalty.

The current version of Jewel Quest boasts 72 exciting levels, with each level increasing in difficulty as new jewels are introduced in variously shaped game boards, often irregularly. The levels span across six beautiful worlds, which are accompanied with their individual background music pieces.

To choose between levels, click on the 'Pause' button. Moving away from the game (for example, onto another tab or minimising the game window) will also automatically pause the game, ensuring your progress will not be lost.

Further challenge yourself to reach for high scores! Points are awarded when a set of tiles are matched, with the number awarded based on the number of tiles matched. In addition, players can score combos if making a match causes other jewels to cascade in a way that consecutive matches are made without the player intervening. This gives the player additional bonuses towards their scores. The number of points scored determines the number of stars awarded for that level. Challenge yourself to earn three stars, the maximum, for each level!

The game itself is designed with some hints and tricks to help players succeed. If you are struggling to find a match, a pair of jewels will sparkle and tremble, indicating that they can be matched if the player swaps these two jewels.

Where you've accidentally selected a tile but no longer wish to swap it, don't worry as this can be undone. Selected tiles will be indicated by a green border. You can then choose to click on an adjacent tile to swap them, or click on the selected tile again to deselect the tile.

On maps in later levels there are some tiles that will not be automatically replaced by cascading jewels due to the shape of the game board. In such cases the player is given the opportunity to select an adjacent jewel and move this into the empty tile, and the jewels above will cascade down to fill the space. However, jewels below an empty tile cannot be placed into the space.

Another useful tip is to target the harder-to-reach areas first when the level begins. You'll find that often you'll need to swap tiles around the main area of the game board to maneuver jewels of the same type to these areas, and so it transforms much of the game board to gold while you're working on these awkward tiles. Two birds with one stone!

A special relic within the game is the Midas' Touch, which comes into play from level 2 onwards. To earn one Midas' Touch, match three or more gold coins in a line.

Midas' Touch is a utility item, allowing the player to transform a single tile's background to gold, regardless of where the tile is located. The item becomes particularly useful for those spaces hard to reach, perfect to close out a level! As only one tile is being affected, the Midas' Touch will only grant the player one point.

However, Midas' Touches can only be used in levels on which they were earnt; Touches earnt on level 4, for example, will not be translated to level 5. Another thing to watch out for is that when any unmatched coins reach the bottom of the game board, they will fall through and will no longer be in play. Players should therefore be careful to keep these on the game board in order to earn them!

Jewel Quest can be played in all modern browsers, on all device types (desktop, tablet, mobile), and on all operating systems (Windows, macOS, Linux, Android, iOS, ...).

Please let me know why you don't like Jewel Quest