Numbrix is a logic-based brain game in which you have to fill the grid with consecutive numbers that connect horizontally or vertically. Our game features a new challenge every day. 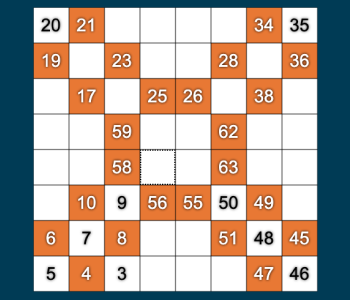 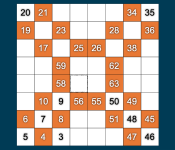 The goal of Numbrix is to fill the grid with consecutive numbers that connect horizontally, vertically, or diagonally. Challenge yourself with the daily puzzle or any puzzle from the past.

As mentioned before, you need to create an ascending series of numbers throughout the grid. Every number needs its ascending number (Value +1) in an adjacent cell (horizontally or vertically). It is not allowed to continue the ascending sequence in a diagonal way.

There are 3 different difficulty levels which differ in the amount of numbers that are already given at the start of the game. Every daily puzzle provides the 3 difficulty levels. See how fast you can fill in every level!

The Hidato game, which is very similar to Numbrix but also allows diagonal moves, was invented by Dr. Gyora M. Benedek, an Israeli mathematician.

The Numbrix puzzles are created by Marilyn vos Savant, an American author and magazine columnist for Parade. She is known for her listing in the Guinness Book of Records as the person with the highest recorded IQ. Definitely a smart person, can you crack her game?

Marilyn vos Savant herself, the inventor of Numbrix, has given a tip to solve Numbrix puzzles. She mentioned that the best approach to solving a Numbrix puzzle is to repeatedly scan from the lower number to the highest, filling in numbers where placement is certain.

Other names and variations

Numbrix is known under different names, which can have slightly different rules or difficulty.

Numbrix can be played in all modern browsers, on all device types (desktop, tablet, mobile), and on all operating systems (Windows, macOS, Linux, Android, iOS, ...).

Please let me know why you don't like Numbrix