Play Scrabble Blast, the fast-paced puzzle version of the classic board game Scrabble. Our version does not require Flash. Create words with high value tiles and use the bonus squares to score as many points as possible. Complete a level by creating 10 words before any Number Bomb reaches the bottom of the board. Which score rank can you reach? 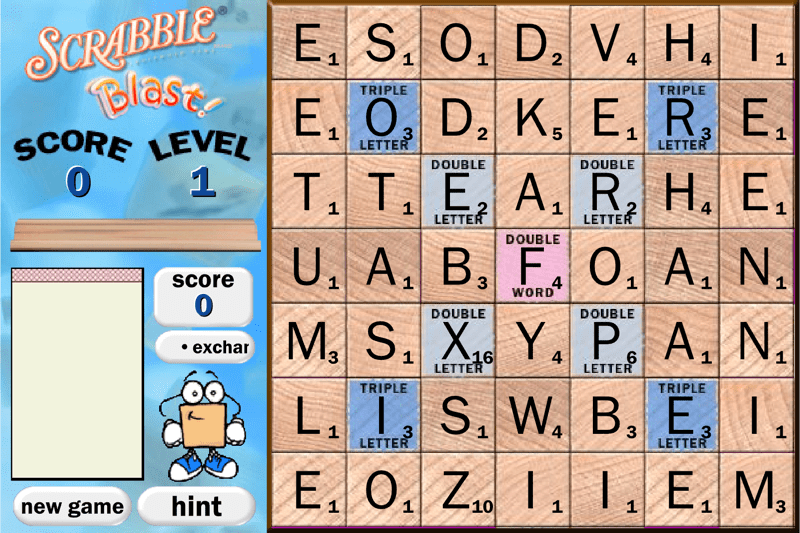 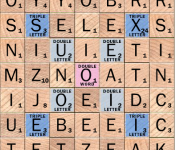 The basics of Scrabble Blast are easy, just click on adjacent tiles to create words. You can create sequences of tiles that are next to each other horizontally, vertically or diagonally.

Create words with high value tiles and use the Bonus Fields to score as many points as possible, just as in the original Scrabble game.

Once you are satisfied with the word you created, press the 'Score' button on the left to submit the word. You can also automatically submit a word by selecting all letters of a word without releasing the mouse in between. This allows you to create and submit words faster.

After you submit a correct word, its letters are removed from the board. The letters above the removed letters fall down and new letters are added at the top of the board.

Beware of the Number Bombs, because if they reach the bottom of the board it is game over. The bombs fall every move you make. You have to defuse these bombs by creating a word of a minimum length with them.

You need to create 10 words to complete a level and advance to the next.

On the game board there are several bonus fields, each giving you a higher score when used in a word:

Based on your score, you will be awarded a certain score rank:

I didn’t manage to go higher than Novice, let me know the highest rank you have reached!

Scrabble Blast also used to be available as an app, but the app has been discontinued.

Scrabble Blast gameplay is similar to Bookworm, one of our most popular word games. Scrabble fans can also try the online version of the original Scrabble, or the fast-paced Scrabble Sprint game. If you enjoy word games, you might also enjoy Text Twist 2 or Word Ruffle.

Scrabble Blast can be played in all modern browsers, on all device types (desktop, tablet, mobile), and on all operating systems (Windows, macOS, Linux, Android, iOS, ...).

Please let me know why you don't like Scrabble Blast