Online version of the famous Scrabble word game. Use the letter tiles from your rack to create words on the board. Place them on premium squares (double letter, triple letter, double word, triple word) to gather more points than the computer opponent. 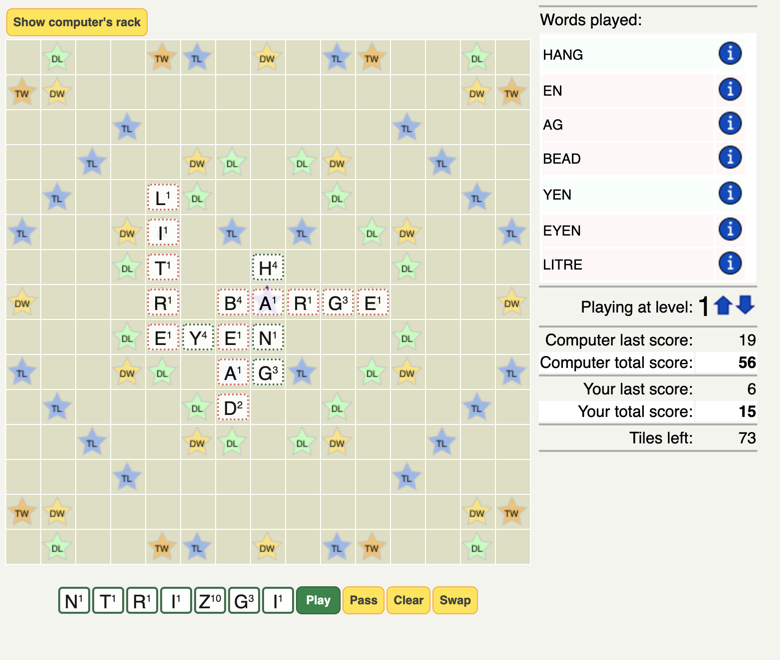 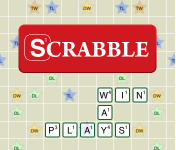 Form words using the letter tiles on your rack. Increase your move score by using high-value letters, creating long words, and placing your word on the premium squares (double/ triple letter score, double/ triple word score). Enjoy the scrabble experience against a computer opponent with five difficulty levels. The Scrabble word game is much more interesting than a crossword game or a word search game.

The goal in Scrabble is to score as many points as possible by placing high-value words on the board.

Below is an overview of the letter distribution and the points per letter in English language scrabble:

At the start of the game, each player receives 7 letter tiles on their rack. In our implementation you play against the computer, and you can make the first move.

Each move you can create one word on the board, using the letter tiles on your rack.

The first word has to be placed with one of its letters on the purple star in the middle of the board.

If you are not happy with the letters on your rack, you can swap them with letters from the bag, or you can pass a turn.

On the board, there are multiple premium (special) squares that increase your word score when a letter is placed on them:

According to your skill level, you can select the difficulty of your computer opponent from level 1 to level 5.

When there are no tiles left in the bag and a player empties their rack, the game ends.

The tiles left in the other player’s rack are deducted from their score.

Our implementation of Scrabble can be played in any web browser, and is best viewed on tablet or desktop screens.

Scrabble Online can be played in all modern browsers, on all device types (desktop, tablet, mobile), and on all operating systems (Windows, macOS, Linux, Android, iOS, ...).

Please let me know why you don't like Scrabble Online