Enjoy the relaxing classic board game Mahjong, with unlimited undo's and reshuffles. 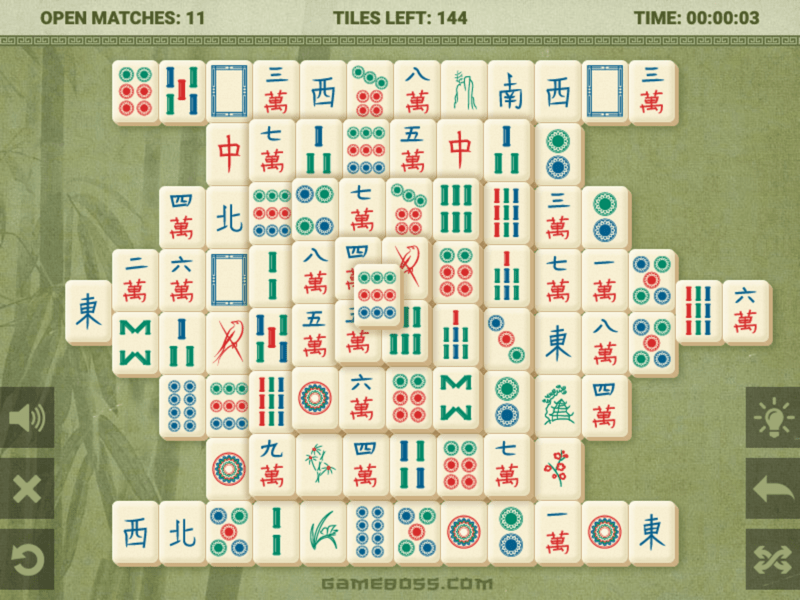 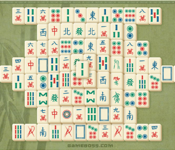 The traditional Mahjong (also known as Mahjongg) as invented in China is played with four players. This computerized version of Mahjong is played alone and is known as Mahjong Solitaire. The goal of the game is to remove all the tiles from the board by matching pairs of identical tiles.

How to play Mahjong Solitaire

Mahjong is played with 144 tiles in total. These 144 tiles are divided into seven groups: Dots, Bamboo, Characters, Winds, Dragons, Seasons, and Flowers. Each tile appears four times, except the Season tiles and Flower tiles, which appear only once. A Season tile can be matched with any other Season tile, although not identical. The same goes for Flower tiles.

The 144 tiles are laid out face-up in a certain pattern. The standard pattern, called the Turtle Formation, consists of five layers and resembles a pyramid, but other layouts are also possible, often resulting in a different difficulty of completing the game.

Playing Mahjong is relatively simple. All you need to do is find matching pairs of free tiles. A tile is considered free if it doesn’t have another tile on top of it, and it doesn’t have a tile to both its left and right side. Remember that normally matching tiles are identical, except for the Season and Flower tiles which can be matched with any other tile in their group. Also, remember that you can use the shuffle or undo function when you get stuck.

Almost all Mahjong deals have at least one solution, so keep the following tips in mind to increase your chances of winning Mahjong Solitaire:

Each implementation of Mahjong is different and features might differ between different versions. One such feature is shuffling the board. We allow an unlimited number of shuffles, while other implementations limit this number. Some other versions have multiple layouts, while the version we have here only has the standard Turtle layout. To keep it relaxing, we didn’t include a time limit unlike some other implementations.

If you like card solitaire games, you might enjoy playing Mahjong Card Solitaire, which is Mahjong but with playing cards instead of the traditional tiles.

Another famous game with tiles is Rummikub.

How many tiles are there in a Mahjong set? Mahjong is played with 144 tiles, divided into seven groups (Dots, Bamboo, Characters, Winds, Dragons, Seasons, and Flowers). Each tile appears four times in the set, except the Season tiles and Flower tiles which appear only once.

Is every Mahjong game solvable? No, in theory, not every Mahjong deal is solvable. Statistical analysis concluded that ~3% of deals in the classic Turtle layout cannot be solved. Note that most computer implementations will only generate solvable boards.

How to win at Mahjong? Always focus on freeing up new tiles. When you have three or more identical tiles freed up, match the ones that free up the most new tiles. Focus on reducing layers and long rows. Think a few steps ahead.

Mahjong can be played in all modern browsers, on all device types (desktop, tablet, mobile), and on all operating systems (Windows, macOS, Linux, Android, iOS, ...).

Please let me know why you don't like Mahjong