Yahtzee is one of the most popular dice games worldwide. Test your luck and use the right strategy to roll the best combinations. In our version you can play alone or against 1 to 3 computer opponents. Remember to celebrate when you roll Yahtzee (all five dice the same)! 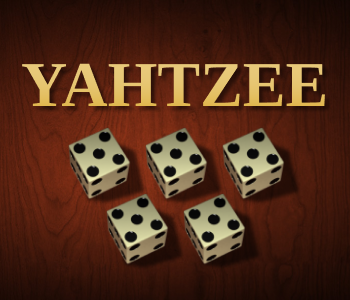 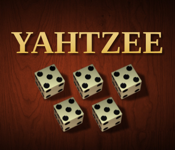 Yahtzee Online is one of the most popular dice games worldwide. The goal of this multiplayer game is to accumulate the highest amount of points by making various combinations using five dice.

Start playing this board game by choosing to play alone or against one to three AI opponents.

During each round, players take turns in rolling the dice a maximum of three times. At the end of the round (or whenever you feel as though you have achieved the best dice combination for that round), the player chooses one of 13 scoring categories, but each category can only be selected once per game per player. The game ends once every player has taken 13 rounds, and so players will have a score for each category, depending on which round they selected it.

Each category has different rules and how the five dice match with these rules will determine the score the player receives for that particular round. Our version will give an indication of how many points you can expect to receive for each category and you can use this to help make your selection.

To help you score higher, players can choose to lock their dice rolls during the round. Locked dice will not roll for the remaining round, but players can unlock these between rolls if they change their minds.

The 13 categories are separated into top and bottom scores.

There are six top categories and these are calculated by totalling the dice with the corresponding number shown. The categories are as follows:

For example, if a player ends their turn with two dice showing the number 4, they will receive 8 points if they select the category Fours for that round.

The remaining categories are called bottom categories and are related to poker. The rules for these are as follows:

Players scoring a total of 63 or more top points will receive a bonus of 35 points.

When a player already has the Yahtzee score box filled, rolling another Yahtzee gives them a bonus of 100 points. However, if the score box is filled with a 0 they will not get the bonus. Instead, they can use the Full House, Small Straight and Large Straight categories to receive the corresponding number of points even if the dice don't meet the rules.

The Yahtzee game was originally invented by Edwin S. Lowe, and the implementation on our website was developed by CodeThisLab.

Play Yahtzee and test your luck! Look out for strategies to roll the best combinations!

Yahtzee Online can be played in all modern browsers, on all device types (desktop, tablet, mobile), and on all operating systems (Windows, macOS, Linux, Android, iOS, ...).

Please let me know why you don't like Yahtzee Online