Throw your opponents off the bus in this quick and fun card game. 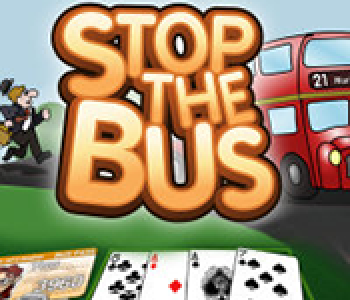 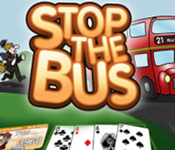 In Stop The Bus you must make sure that you win enough rounds and most importantly do not lose many rounds, to try and throw your opponents off the bus.

Like a lot of Crystal Squid card games, the tutorial is a brilliantly helpful way of learning how to play this game.

There are three difficulty levels, and we must admit that this free card game got us hooked!

Collect and swap your cards to get as close to 31 with cards of the same suit. Aces as you might expect are worth 11 points and Jacks, Queens and Kings are worth 10 points. Additionally getting any three of a kind (of course in three different suits) is always worth 30 points. So for example having a hand of say the 2 of hearts, 2 of diamonds and 2 of clubs is worth 30 points.

You get three bus tokens, and you only lose bus tokens if you are last in the round. So the most important thing in this card game is to make sure that you are not last because the last player loses a token.

Once you are satisfied that you can either win a round (or not come last), then you can stop the bus! Each player then has one last chance to improve their hand before all the scores are added up and the player with the lowest number of points get's a bus token removed.

To win you must drive all the other players out of the game!

The previous version of Stop The Bus we had on our website was developed in Flash by Crystal Squid. This current version is developed with HTML5 technology.

How do you play the Stop The Bus card game?

Each player is dealt 3 cards. Then each player in turn draws a card from the deck or the waste, and discards a card. Play continues clockwise. The goal is to get as close as possible to 31 points of the same suit. Aces count as 11 points, Kings, Queens and Jacks count as 10 points. Three of a kind is worth 30 points. The player with the lowest score loses 1 of their 3 bus tokens. When a player loses all bus fare tokens they are thrown off the bus.

How many decks do you need to play Stop The Bus?

Stop the Bus is played with one regular deck of playing cards, meaning 52 cards consisting of 4 suits (hearts, diamonds, spades, clubs) of 13 cards each.

How many players do you need to play Stop The Bus?

Stop the Bus can be played with 2 to 9 players. The best number of players is 3 or 4, that's why the version on our website has 4 players.

Stop the Bus can be played in all modern browsers, on all device types (desktop, tablet, mobile), and on all operating systems (Windows, macOS, Linux, Android, iOS, ...).

Please let me know why you don't like Stop the Bus