You can now play the classic board game Monopoly online! Join a public game or create your private game to play with your friends. Buy and sell properties and try to become a rich landlord. 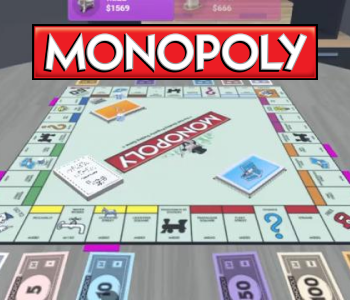 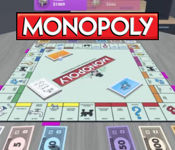 In this classic Monopoly board game based around real estate and property trading, each player controls a game token and takes turns moving around the game board. Buy and trade properties to collect rent from other players when they land on your properties. Enhance your properties with houses and hotels to drive your opponents into bankruptcy.

The goal in the family board game Monopoly is to become the wealthiest monopoly and drive your opponents into bankruptcy!

The monopoly game board consists of 40 spaces in total:

Of the property spaces, there are 22 street spaces (grouped into 8 color categories), 4 railroads and 2 utilities.

At the beginning of each game, players select their unique game piece and are given an equal sum of starting money. Each player takes turns to roll two six-sided dice to determine how many spaces they are to advance in a clockwise direction. Rolling doubles gives the player the opportunity to roll again after they have moved, but rolling three doubles in a row will send the player to jail immediately (no spaces moved on the third roll).

Players can obtain $200 every time they pass GO, while players landing on “Go to Jail” must immediately do so. Players in jail can get out by paying $50, rolling doubles or using special get-out-of-jail cards. Where a player has failed to roll doubles on three attempts to get out of jail, they must pay the fine. They can then proceed to move the number of spaces specified on their last dice roll. Note: rolling doubles will allow the player to leave jail and move, but they will not be able to roll twice consecutively.

Players landing on the Luxury Tax and Income Tax spaces must pay the amount shown on the space. Players landing on a Community Chest or Chance space can pick up the corresponding card and follow the instructions stated.

Mortgaging owned properties can be a way to overcome financial struggles. Any and all buildings must be sold before this (for half the purchase price) and half the purchase price can be obtained for mortgaging the property. Repayment with 10% interest will clear the mortgage and until this is done rent cannot be collected on the mortgaged property. Alternatively, mortgaged properties can be traded with others. In such a transaction the buyer can choose to pay the mortgage price plus 10% interest to the bank, or just 10% interest (in addition to the agreed price with the seller).

A player is declared bankrupt when they can no longer pay what they owe. Their properties (except buildings) then become the property of whomever they owe - if it is the bank they owe, the bank can auction off the properties. Rules for mortgaged properties will still apply. Alternatively, players can try and raise enough money to avoid bankruptcy by selling buildings and properties.

This classic board game can be played in online multiplayer mode by joining public games. You can also host private games and share the link to play with family or friends online.

To increase your chances, aim at purchasing high income-generating properties, such as those in the blue property group and the green property group.

Another way is targeting spaces that other players frequently land on. Statistically, these are the four railroads, the orange property group and the red property group.

You can also strategize through trading in order to acquire a full color group. This helps them build houses faster, thus massively increasing rent amounts. A property with three houses can earn back its purchase price with just one player landing on it.

Monopoly was launched in 1935 and is currently published by Hasbro. The version on our website is developed by TeamLava. Monopoly belongs to the category of board games.

There are several other classic board games on Solitaire Paradise that you can check out if you like Monopoly. For example Rummikub and UNO. Also don't forget classics such as Minesweeper and FreeCell.

Monopoly can be played in all modern browsers, on all device types (desktop, tablet, mobile), and on all operating systems (Windows, macOS, Linux, Android, iOS, ...).

Please let me know why you don't like Monopoly