A two player card game also known as Cat and Mouse or Skip-Bo. 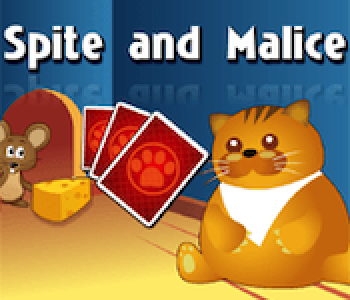 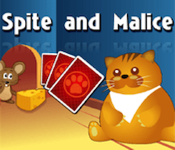 How to play Spite and Malice

The object of Spite and Malice is to get rid of all your cards in your goal pile by placing them on the playing piles. The first player to empty their goal pile wins.

Spite and Malice is played with three decks of 52 cards each, hence 156 cards in total. Each player has their own goal pile, four discard piles and a hand with maximum five cards. There are four common playing piles and a common draw pile. At the start, a certain amount of cards are dealt to each player's goal pile, face-down. The top card of the goal piles is turned face-up. The rest of the cards go into the common draw pile, face-down.

Hopefully, you can use some of these tips on how to win at Spite and Malice in your next game.

Can you play Spite and Malice with three players? Yes, Spite and Malice can be played with more than two players, if some rule variations are taken into account. The number of cards dealt to the goal piles is 17 for three players and 13 for four players. The game is played in a clockwise direction. The player with the highest card on his goal pile after the deal starts.

Please let me know why you don't like Spite and Malice