Combination of two popular games: solitaire and 2048. Two cards with equal numbers stacked on eachother will merge into the next power of 2. Reach 2048 to win the game. 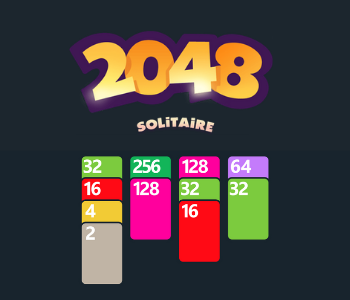 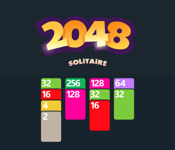 2048 Solitaire is a combination of two hugely popular games - solitaire and 2048. Together this puzzle game calls for hours of fun while stimulating minds.

The goal of 2048 Solitaire is to match cards with the same number, stacking them on top of each other to form higher powers of two. The ultimate goal is to obtain the 2048 card, but players can continue to play after this has been achieved to obtain higher scores.

As in a solitaire game, players are presented with two cards at a time. Each card has a numerical value and this can be differentiated by the color of the card. Only the top card can be played; the second card cannot be played until the top card has been placed.

To begin with, players can click and drag cards from the bottom onto four empty spaces. Cards of any numerical value can be placed on empty spaces. Combining two cards of equal value will merge to create a card with the number of the next power of two. Take a look at some examples.

The game increases in difficulty as it is played out, with higher value cards being presented to the player at the bottom of the screen. The idea of the game is to play until the 2048 card is reached. The following indicates the pattern cards are combined to form powers of twos.

As the game progresses, the cards will stack to form columns. Be careful not to let these reach the dash line at the bottom of the game board. If the column does reach this line, new cards cannot be placed on the stack. However, dragging cards of equal value onto this stack will cause the cards to immediately combine together, giving players a chance to clear the column.

Beware - the game is over when all four stacks reach the dash line. And so, it is important to clear columns and shrink stacks by matching cards on top of each other.

To help them through the game, players are given the opportunity to discard the present card in play. Use this wisely though as this feature can only be used twice per game!

Occasionally, the game will present the player with a wild card as one of the cards at the bottom. This can be played as a card of any numerical value when dragged onto another card already on the board. For example, if there is already a '1024' card on the board, placing a wild card on this will produce another '1024' on top. These will immediately merge to give the '2048' card!

2048 Solitaire can be played in all modern browsers, on all device types (desktop, tablet, mobile), and on all operating systems (Windows, macOS, Linux, Android, iOS, ...).

Please let me know why you don't like 2048 Solitaire