Connect 4 is a classic two-player game now available online. Win the game by being the first to form a continuous line of four discs. 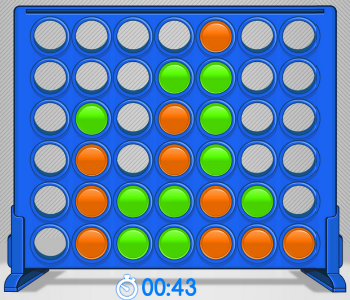 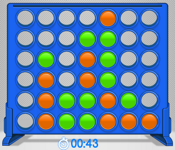 Connect 4 (or straight 4) is a classic board game now available and perfect for two players.

Players race to be the first to form a continuous line of four discs - this can be horizontal, vertical or diagonal. Beat your opponent to it to win the game!

Each player has their own discs of a corresponding color - either green or orange. Players alternate to take turns dropping their discs into a vertical game board, with the ultimate goal to form a line of four discs.

The game board is a grid made up of seven columns and six rows. This gives 42 possible spaces, meaning each player has 21 turns to reach the goal (provided that their opponent doesn't beat them to it!). When a disc is dropped into the board, it falls to occupy the lowermost available space in that column.

Tip: Keep an eye out for your opponent's moves! Use one of your own discs to block your opponent when they are close to getting four in a row.

The average game time of a Connect 4 game is ten minutes. In this version, you can choose to play with other people through local multiplayer, with players taking turns to control the mouse. Alternatively, challenge yourself against a computer!

Though the game seems simple, players can utilize different strategies and learn various tactics to increase their chances of winning. Connect 4 has been researched extensively in efforts to find these mathematical solutions and strategies.

Generally speaking, there are high chances that the player making the first move can dictate how the game will play out.

Don't worry if you’re not the first player! There are still other ways for you to influence the outcome of the game! Here are some more tips:

Our version of Connect 4 is developed by Code This Lab. Connect 4 belongs to the category of board games and was first introduced by popular board game manufacturer Milton Bradley in 1974.

Connect 4 can be played in all modern browsers, on all device types (desktop, tablet, mobile), and on all operating systems (Windows, macOS, Linux, Android, iOS, ...).

Please let me know why you don't like Connect 4