In this classic board game it is all about jumping over the opponent's pieces to capture them. The first player without pieces left loses the game. 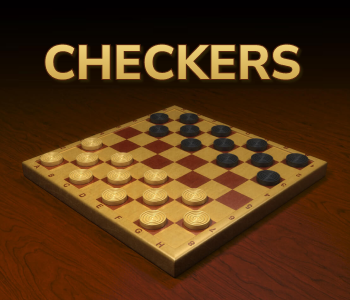 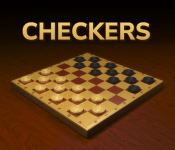 A popular classic in the United States, Checkers (also known as draughts) is a strategy game played between two players. The name arose from the 8x8 checkered chess board, with light squares and dark squares, that the game is played on. Play the classic board game and enjoy the fun brain-teaser!

The goal of the checkers game is to be the last player standing. To do so means capturing as many of the opponent pieces as possible, or when the opponent has no moves left (achieved by blocking their game pieces).

To play the checkers game, players take turns moving their allocated game pieces (12 pieces each). One player controls the light-colored pieces while the other uses dark-colored pieces, and each occupies opposite sides of the game board.

During their turn, players can move one piece only, and pieces can only move diagonally onto adjoining unoccupied spaces. In doing so, only the dark squares of the game board are used.

Practice this in-game with our handy indicators - click on a game piece to show available moves! Additionally, successive moves are allowed - a player can capture multiple opponent pieces in one turn.

Beware though - if your enemy presents a situation where you can capture their piece, you must take it during your turn. This is called a forced move.

Regular game pieces are called 'men' and become 'kinged' pieces when they reach the opponent's end of the board. Men follow the same movement rules as mentioned before and can only advance forward, while kings can move backwards as well as forward. Kings can therefore capture pieces behind them too.

Our current version features two game modes - players can choose between playing versus the computer (or local multiplayer) or against other online players. To play against online players, simply customize your nickname and browse from the available game rooms.

You can also create your own private game room, sharing the password to this with friends to play together online.

The game is developed by Code This Lab.

Checkers can be played in all modern browsers, on all device types (desktop, tablet, mobile), and on all operating systems (Windows, macOS, Linux, Android, iOS, ...).

Please let me know why you don't like Checkers