Chess ia a classic board game requiring strategy, experience and courage. Can you checkmate the opponent's king? This version has 3 difficulty levels. 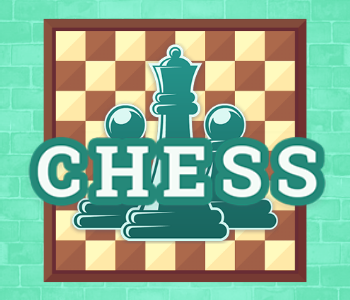 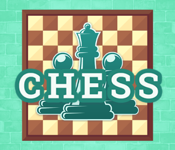 Chess is a classic board game requiring strategy, experience and courage. A perfect way to tease the brain! Can you checkmate the opponent's king?

The goal of Chess is to checkmate the opponent's king. A king in checkmate means the king has no routes to escape and will ultimately be captured on the next move. Practise your skills with our fun game modes and work your way to become one of the chess masters!

Game Board and Pieces

Chess is played on a 8x8 game board with players occupying opposite sides of the chessboard. The rows on the board are referred to as ranks, while the columns are known as files.

Players are assigned either white or black pieces with 16 chess pieces each. This consists of 8 pawn pieces, 2 rooks, 2 knights, 2 bishops, a queen and a king. At the beginning of the game players will have all 8 pawns placed on their second rank. Pieces are placed in the following order on the first rank - rook, knight, bishop, queen, king, bishop, knight, rook.

Each piece has different rules regarding movement:

When in checkmate, the checked chess player can only continue the game by moving the king to a safe square. If they are not able to, the player loses.

There are two game modes in our version of Chess - quick match and puzzles.

Select the quick match mode to play regular chess against a computer AI, which players can select from three difficulty levels. Players are also able to choose which color they play as - the player controlling the white pieces will always move first.

Regular chess gameplay rules are in place. Pieces can be moved legally to unoccupied squares or a square occupied by an opponent’s piece (this opponent’s piece is therefore captured and removed from the game). A legal move means the piece must follow the movement rules highlighted above.

Castling is a special move involving the king and a rook. The king moves two spaces towards the rook, and the rook moves to space on the other side of the king, adjacent to it. The king can castle to a side only if following conditions hold:

En passant, meaning 'in passing', is a special move involving pawns. Consider a black pawn makes its first move and advances two steps before ending their turn (landing on G5). If a white pawn is adjacent to the black pawn's landing square (on F5 or H5), the white pawn can capture the black pawn and moves to occupy the space the black piece moved over (G4).

Puzzle mode offers an exciting twist in contrast to the normal gameplay of Chess while still adhering to regular rules.

At the beginning of the puzzle, the player is presented with a chess composition from a previous tournament, played between chess masters. They must examine the situation and try to checkmate the opponent’s king within a certain number of moves.

Our version features three levels of difficulty, where the player is allowed either 2, 3, or 4 moves within which they must win the game.

Chess can be played in all modern browsers, on all device types (desktop, tablet, mobile), and on all operating systems (Windows, macOS, Linux, Android, iOS, ...).

Please let me know why you don't like Chess