Crazy Eights is a fun card game. Be the first to get rid of all your cards. This version uses the basic Crazy 8s rules. 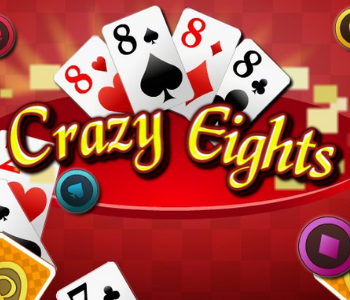 Crazy Eights uses a regular deck of 52 cards. In this fun card game, the rank of the cards is only important when matching with that on the card face in the discard pile.

To start the game, each player is dealt eight cards. The dealing direction is clockwise.

The version on our website uses the basic Crazy Eights rules. The objective of this game is to be the first player to discard all their cards.

As mentioned, each player starts with eight cards. The remaining cards are placed in a pile in the center of the table, facing down. This is called the stock pile. The top card in the stock is then turned upwards to act as the beginning of the discard pile.

In a clockwise direction, players take turns to discard cards one at a time. Players can only get rid of cards which match the suit or rank shown on the top card of the discard pile. For example, if the card face on the discard pile shows an Ace of Diamonds, only Aces or Diamonds can be discarded by the next player.

Exceptions to this are cards with rank 8. These can be played at any time, regardless of what card is on the top of the stock. Playing an 8 allows the player to change and choose what suit the next player must subsequently play, though they may also play another 8 if they hold one.

Where a player has no available moves (i.e no cards they can discard) they must pick up a card from the centre pile. A useful feature of our version is that the game will automatically inform players if there are no possible moves, prompting them to draw cards. When there are no more cards left in the center pile, the discard pile is shuffled to form a new pile, though the top card remains in place.

The first player to get rid of their hand wins the round. The game plays for four rounds, and the player with the most points at the end of all rounds is declared the winner.

There are multiple variations of Crazy Eights. A popular variant in the United States is called Crazy Eights Countdown, while Switch, Mau-Mau and Uno are also similar to the base card game.

Crazy Eights is one of the simplest game to add modifications to through the introduction of additional rules. An example of this is the rule ‘Queen Skip’, where playing a Queen leads to the next player skipping their turn.

Crazy Eights can be played in all modern browsers, on all device types (desktop, tablet, mobile), and on all operating systems (Windows, macOS, Linux, Android, iOS, ...).

Please let me know why you don't like Crazy Eights