The Hearts card game is a classic trick taking game for 4 players. This version allows you to play against the computer. 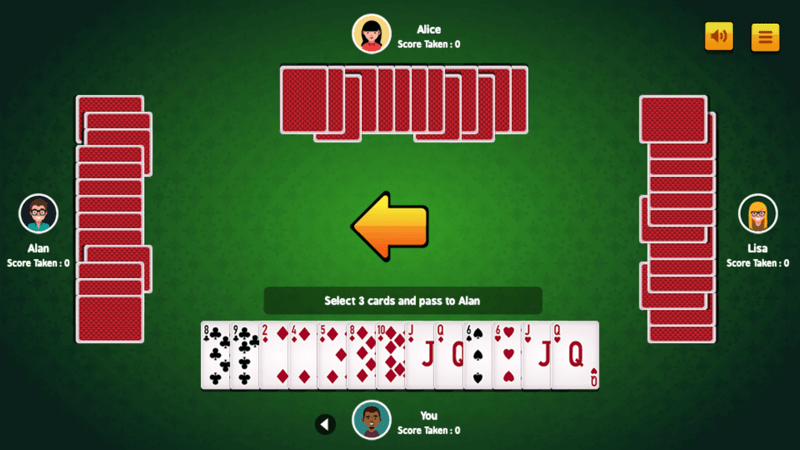 The Hearts Card Game has quite a few rules, but it is quite a well liked card game if you take the time to learn them. If you fancy a break from solitaire, this is a very interesting alternative.

Hearts is played with four players who each play individually.

Each player is dealt 13 cards. The dealing direction is clockwise.

After looking at their hand, each player chooses three cards and passes them face down to another player. All players must pass their cards before they can look at the cards they have received. The passing rotation is: 1. to the player on your left, 2 to the player on your right, 3 to the player across the table, 4. no passing. This rotation repeats until the game ends.

After the initial passing, whoever holds the 2 of clubs has to play that card to start the first trick. Every player must follow suit if possible. If a player has no cards in the suit, a card of any other suit may be discarded. There is one exception, if a player has no clubs when the first trick is led, a Hearts or the Queen of Spades cannot be played.

The highest card of the suit led wins a trick, as there are no trumps in Hearts. The winner of the trick gets all the cards and starts the next trick. Hearts may not be led until a Hearts or the Queen of Spades has been played (this is called "breaking" hearts). The Queen of Spades can be led at any time.

The goal of Hearts is to score as few points as possible. At the end of each hand, the number of Hearts a player has taken is counted. Each card of the Hearts suit counts for 1 point. The Queen of Spades adds 13 points. If a player has won all 13 Hearts and the Queen of Spades, that player can choose to subtract 26 points from his score, or to add 26 points to every other player's score.

The game ends when one of the players reaches 100 points. The player with the lowest score wins.

If you like Hearts, try out other trick-taking games such as Spades and Euchre.

Hearts Card Game can be played in all modern browsers, on all device types (desktop, tablet, mobile), and on all operating systems (Windows, macOS, Linux, Android, iOS, ...).

Please let me know why you don't like Hearts Card Game