A popular trick taking card game where you play against 3 computer controlled players. 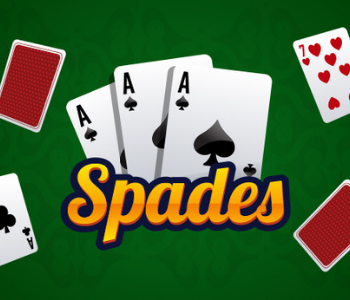 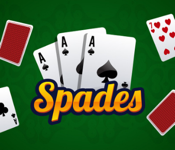 Spades is played with four players in two partnerships of two players each.

Each player is dealt 13 cards. The dealing direction is clockwise.

All players bid the number of tricks they are aiming to take. All players play in a partnership, so bids by each member of the partnership are added together.

You can bid Nil if you think you will not earn any trick. In this case, your bid will be scored independently of your partner. You can also bid Blind Nil (Double Nil) even before you view your cards.

The objective of the game is to win the amount of tricks that was bid.

The playing direction is clockwise. You must follow the suit if you can, otherwise any card can be played. A player may not lead with a spades until spades have been broken (a spade card has been played to trump another trick).

A trick is won by the player who played the highest value card. If one or more trumps are played, the highest trump card wins, otherwise the highest card of the suit which was led wins.

When a team wins the amount of trick they bid, they earn 10 points for each trick in the bid, and one point extra for each additional trick.

Every trick above your bid will count as a bag. For every 10 bags, 100 points will be deduced from your score.

Spades has many variations, both in terms of dealing, bidding, trump, gameplay and scoring. We highlight only Deuces High, our personal favourite.

In the Deuces High variation of Spades, the 2s in the game become the highest spades. The order of the cards in the spades suit now becomes from highest to lowest: 2 of spades, 2 of diamonds, 2 of clubs, 2 of hearts, Ace of spades, King of spades , …, 3 of spades. This variation is played without the Jokers.

If you like Spades, try our other trick taking game Hearts.

Spades can be played in all modern browsers, on all device types (desktop, tablet, mobile), and on all operating systems (Windows, macOS, Linux, Android, iOS, ...).

Please let me know why you don't like Spades