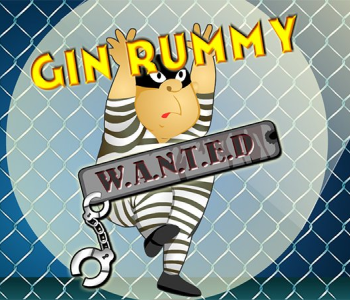 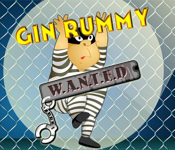 Gin Rummy is played with 2 players, playing against each other.

Each player is dealt 10 cards at the start of the game. The remaining cards are placed face down in a deck in the middle, the stock pile. In addition, there is one card face up next to the deck, this is the discard pile.

Your goal is to create sets of 3 or 4 cards consisting of either all the same numbers or a sequence in the same suit. You can do this by taking an extra card from the deck or the one visible card. Once you take a card, you have to discard a card as well. This way you always hold 10 cards after your turn. If you take the visible card, you have to discard one of your other cards. If you take a face-down card from the deck, it is allowed to discard this card as well.

Note that the ace can only be used as the value of 1. The following set can NOT be formed:

Your score is determined by the so-called deadwood. All cards in your hand that are not in a combination count towards your deadwood total. Your goal is to score an as low as possible deadwood.

The Jack, Queen and King are all worth 10 points. The Ace is always worth 1 point. The other cards are worth their numerical value.

You ‘go gin’ if all the cards in your hand are in a set. In that case, your deadwood is 0.

If your deadwood total is less than 10 you can ‘knock’ and see who the winner of the hand is. Beware though, if you try to hold out too long your opponent may knock before you and win.

This game was developed by Zygomatic, the developer of our Spite and Malice game.

Other games in the category of card exchange games are Stop the Bus and regular Rummy. Also Rummikub is related to Gin Rummy.

Gin Rummy can be played in all modern browsers, on all device types (desktop, tablet, mobile), and on all operating systems (Windows, macOS, Linux, Android, iOS, ...).

Please let me know why you don't like Gin Rummy