Brisca is a tactical Spanish card game similar to Tute and Briscola. 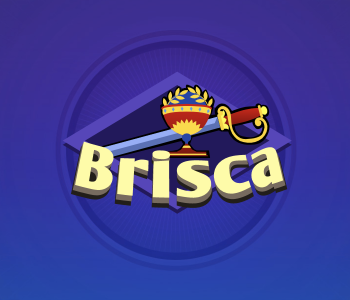 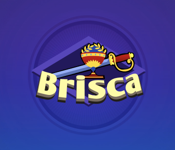 Brisca is a Spanish trick-taking card game. It is played with 2 or 4 players, using 40 cards from a Spanish-suited deck. The game is played counter-clockwise. The main skills required for Brisca are tactics and memory. There is a medium random chance involved in the game. Brisca is related to the Spanish card game Tute and to the Italian card game Briscola.

Brisca can be played with two players, or with four players in two teams of two players.

Brisca can also be played with French-suited cards, by removing the 8s, 9s and 10s.

The objective in Brisca is to be the first player to win the target amount of rounds. A round is won by winning tricks with valuable cards.

Each player is dealt three cards in counter-clockwise direction. The rest of the cards go face-down into a pile, referred to as the stock. The top card of the stock is turned face-up and placed partially underneath the stock. The suit of this card is the trump suit for this round.

The player to the right of the dealer leads the first trick. Brisca is played in counter-clockwise direction. The player who wins the trick starts the next trick.

Following suit is not mandatory, so a player can play any card he wants in his turn.

The winning player collects the cards from the trick. Then all players draw a card from the stock, beginning with the player who won the trick.

If a player has won a trick and there are one or more unused cards in the stock pile, he can swap certain cards with the face-up card underneath the stock before playing a card to the trick. Swapping can only occur once per trick.

The only possible swaps are:

When holding the three best trump cards (Ace, 3, Rey) you immediately win the round.

After playing all tricks, each player (or team) calculates the score for the cards in the tricks they won. The player (or team) with the highest score wins the round, so 61 or more points out of a total of 120 points. When both players (or teams) have 60 points, the round is won by the winner of the last trick.

Brisca can be played in all modern browsers, on all device types (desktop, tablet, mobile), and on all operating systems (Windows, macOS, Linux, Android, iOS, ...).

Please let me know why you don't like Brisca