Klaverjassen is a popular Dutch trick-taking card game for four players. The rules are not so easy, but the in-game help section explains them well. 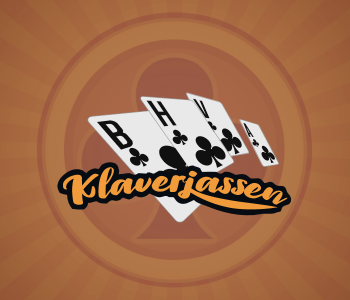 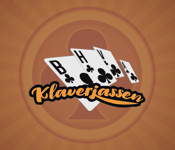 Klaverjassen is a card game for 4 players. It is enormously popular in the Netherlands. It has two main variants, the Amsterdam and the Rotterdam variant.

Klaverjassen is played with 4 players who form 2 teams of each 2 players. Players who are sitting across from each other in a diagonal way are in the same team. Different players are indicated with their relative compass point, namely South, North, West and East. South and North are about to form a team together, and likewise West and East.

Klaverjassen is played with 32 cards of a normal deck. The Ace, King, Queen, Jack, 10, 9, 8 and 7 of each card type are used. These cards, from 7 up to the King and Ace are also called the piquet cards.

The cards each have the value indicated between the brackets below. They are ranked high to low:

Goal of the game

You win a game if you collect more points than your opposing team.

Each player receives 8 cards (first 3, then 2, and finally the remaining 3). The cards are dealt clockwise.

The player left to the dealer starts the first trick. The playing direction is clockwise. The winner of each trick can play the first card of the next trick.

The winner of a trick is the highest trump card, if of course any trump cards are played. Otherwise, the highest card of the first played suit wins the trick.

You have to follow suit. It is mandatory to play a card from the same suit of the first played card if you have any cards of this suit.

Certain card combinations in a trick earn more points for the winner of the trick. This is called ‘Roem op tafel’.

The card combinations where 3 or 4 consecutive cards of the same suit are played earn more points. The term consecutive implies the following regular order of cards: Ace - King - Queen - Jack - 10 - 9 - 8 - 7.

When the Trump King and Trump Queen are in a trick, the winner of the trick earns an additional 20 points.

Notice that the Roem points can go to the other team if you lose the round.

When a team wins all the tricks, it is called a March (Pit in Dutch). This earns an additional 88 points.

After playing the 8 tricks, each team has to count the value of all cards they won. Afterwards they have to add the extra points of the Roem and the March.

End of the game

The game ends after 16 rounds.

Please let me know why you don't like Klaverjassen