Escoba is a popular fishing-type card game from Spain which resembles the Scopa card game. 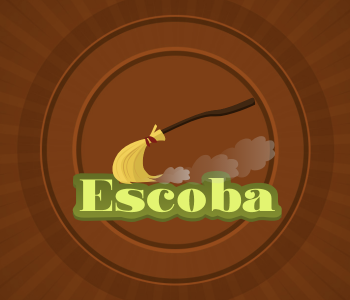 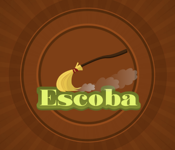 Escoba is a fishing-type card game. It is most popular in Spain, and also in Argentina and Chile.

Escoba is played with 2, 3 or 4 players, using a Spanish-suited deck with 40 cards. The game is played counter-clockwise. A game takes around 20 minutes to play. Escoba is closely related to the Italian card game Scopa.

How to play Escoba

Escoba can be played with 2 or 4 players. When playing with 4 players, it is played with two partnerships of two players each.

Each card has a certain value when captured:

Note that this value for capturing might be confusing because of the card designs of the Rey, Caballo and Sota. On the Rey, the number 12 is indicated, on the Caballo the number 11 and on the Sota the number 10.

Escoba can also be played with a regular French-suited deck by removing the 8s, 9s and 10s of each suit.

The objective in Escoba is to capture cards from the table to earn points.

Each player is dealt 3 cards. The dealing direction is counter-clockwise. The dealer also puts four cards in the middle of the table, face-up. The rest of the cards go face-down in the stock.

When each player has played 3 cards, the dealer again deals 3 cards to each player.

The player to the right of the dealer starts playing, the playing direction is counter-clockwise.

Capturing cards is the core of Escoba. In order to capture one or more cards, they must add up to 15 together with the played card.

When you capture all cards on the table, this is called an escoba and it earns an additional point.

If the four cards in the initial deal add up to 15 (or 30) they are counted as one (or two) escobas for the dealer. This is referred to as escoba in dealing and can be unchecked in the game options if preferred.

When the three cards in your hand sum up to 15, you can capture them and this counts as an escoba. You will have to skip the next two turns. This is referred to as escoba in hand and can be unchecked in the game options if preferred.

When the player before you plays a card which can make a capture, but the player doesn’t take the capture, you can do this by pressing the Take button. This is referred to as renuncio and can be unchecked in the game options if preferred.

At the end of the round, there are several points awarded based on the cards that were captured by a player:

Escoba can be played in all modern browsers, on all device types (desktop, tablet, mobile), and on all operating systems (Windows, macOS, Linux, Android, iOS, ...).

Please let me know why you don't like Escoba