Euchre is one of the most popular trick-taking card games, played with 4 players. 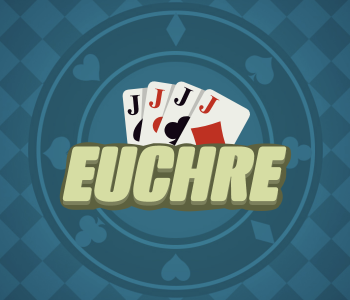 Euchre is a trick-taking card game, mainly popular in Canada and in the USA (especially in the North-East and Midwest), but also played in Australia, New Zealand and some coastal areas of Britain (e.g. Devon, Cornwall, Kent and the Channel Islands).

Euchre is played with 4 players, using 24 or 32 cards from a French-suited deck. The game is played in clockwise direction. There is a medium random chance involved in the game. It takes around 25 minutes to complete a game. The main skills required to play Euchre are memory and tactics. Euchre is related to Skat.

How to play Euchre

Euchre is played with four players in two teams of two players.

The objective in Euchre is to score points by winning more tricks than the other team.

If none of the players decides to play with the suit of the top card, there is another round. Each player can now pick a different suit as trump. No card is picked up by the dealer in this round.

If each player also passes in the second round, the cards are dealt again. This is called a misdeal. When the stick the dealer option is enabled, there is no misdeal but the dealer must declare trump at the end of the second round.

The team who chooses the trump is known as the makers. The other team becomes the defenders.

A player can decide to go alone, meaning that his partner doesn’t participate. The cards of the partner don’t participate in the game. Going alone increases the points for winning all five tricks from 2 to 4, but does not have any effect on the scoring when winning 3 or 4 tricks.

When the Canadian Loner option is enabled, and the partner of the dealer chooses the face-up card of the kitty, he has to play alone.

The game is played in clockwise direction. Following suit is mandatory. The left bower is considered as a member of the trump suit.

You can play this game in multiplayer version here.

Euchre can be played in all modern browsers, on all device types (desktop, tablet, mobile), and on all operating systems (Windows, macOS, Linux, Android, iOS, ...).

Please let me know why you don't like Euchre