Dominoes is a family of tile-based games, enormously popular in the United States, but also in other parts of the world. Using a domino set, many different games can be played, similar to how playing cards can be used to play a variety of card games. Our game version features 5 domino games: Block, Draw, Muggins, Sewastpol, and Bergen. 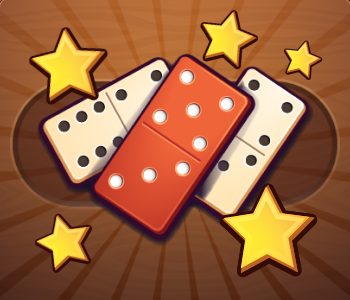 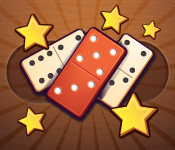 The goal in most domino games is to remove all your tiles before the other players do. The non-winning players’ performances depend on the number of pips on their remaining tiles and on the version you are playing. You always want the total number of pips on your own tiles to be as low as possible.

Domino games are played with a domino set, which typically consists of 28 tiles (tiles are also referred to as pieces, bones, rocks, stones, cards or just dominoes). Each tile has 2 ends which can contain up to 6 pips.

The design of the tiles can be changed if you have earned enough stars while playing the game. You can earn stars by winning games. These stars can also be used to change the background into a different colour.

The game starts by selecting one domino tile from the presented pool of tiles. The player with the highest number of pips on the tile can play first. If you play the game with only two players, you will receive 7 tiles. With more than 2 players, everyone will receive only 5 tiles (there is however one exceptional game type where this is not valid).

You can remove your tiles by matching them with the tiles on the board if they contain the same number of spots on at least one of their two ends. The game indicates which tiles you can play and what the possible positions on the tableau are. There are some specific gameplay-rules per game type.

You can select a game type in the beginning of a game. The standard game type is Muggins. The scoring depends on the game versions. A quick overview of the biggest differences is provided below. The player who can remove all his own tiles wins in every version. The key difference between the games is what happens when none of the players have any option left.

Muggins is a game type where Dominoes is a draw game. If you are not able to play a tile, you have to draw tiles until you can play. This means that you can get a lot of extra tiles in one turn.

In addition, the first doublet dealt is a spinner, meaning that you can match tiles on the 4 sides of this tile, instead of just 2.

The round continues until one of the players clears all his tiles, or no moves are available for all players. In the latter case, the player with the lowest sum of pips on his remaining tiles wins the round.

The player with the lowest number of pips wins the round. If a player matches the fourth side of a spinner, and the sum of all four ends is a number divisible by 5, he scores points equal to that sum.

The biggest difference with Muggins is when a player cannot play a tile in his turn. The player draws 1 tile, instead of drawing until he can play. If the player can play this tile, you are allowed to do so immediately. If not, your turn passes without the obligation to draw more tiles from the pool.

When you are unable to play your turn, you have to pass. There is no drawing of tiles in this version.

Scoring in the Block game is similar to the Draw game.

In this version, the first doublet dealt is a spinner (similar to Muggins). You also have to keep drawing tiles until you can play.

Scoring in Sewastpol is similar to the Draw game.

In this version, if you are with 2 or 3 players, you start with 6 stones. 4 or more players will start with each 5 stones.

A player has to keep drawing tiles until he can play when it is his turn.

In this version, you earn 10 points if you win the game. This is determined similarly to the Draw-version. In addition, there are bonus points you can earn with special moves throughout the game.

You earn 20 points if you play a tile with the same number of pips on its outside end as the outside end of the tile on the other side of the tableau.

You earn 30 points if one of the two mentioned tiles on the opposite side of the tableau is a doublet.

Apart from the theme of the tiles and the background you can change upon earning enough stars, there are some more cool features implemented into this board game. For instance, there is a weekly, monthly and overall online ranking. Compare your skills to the rest of the world!

You can follow your own performance in the Statistic tab, definitely something to check out.

Dominoes Game can be played in all modern browsers, on all device types (desktop, tablet, mobile), and on all operating systems (Windows, macOS, Linux, Android, iOS, ...).

Please let me know why you don't like Dominoes Game