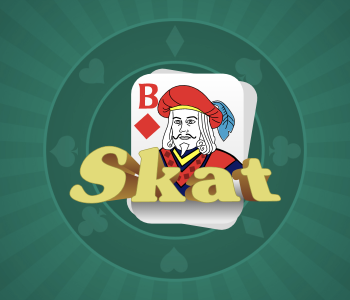 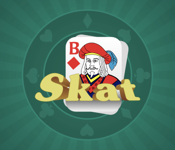 Skat, also known as Skaat in Dutch, is a trick-taking card game with origin in Germany. It is considered to be the national card game in Germany, it is also popular in parts of Poland, and it is also played in Denmark, Switzerland and Austria.

Skat is played with 3 players, using 32 cards from a French-suited deck or German-suited deck. The game is played clockwise. The main skills required for Skat are hand evaluation, counting and cooperation. There is a low random chance involved in the game. Each hand takes between 3 and 5 minutes to play.

How to play Skat

Each player gets 10 cards in total. The 2 remaining cards form the Skat. The dealer deals 3 cards to each player, followed by 2 cards in the middle, followed by 4 cards each and again 3 cards each. In the next round, the player to the left of the dealer will become the dealer.

The bidding (or auction, called Reizen in German) decides who will play the round as declarer, with the other 2 players forming the defending team. It will also decide the minimum game value the declarer needs to win the game.

The game value depends on the type of game and the game level.

In a suit game, one of the 4 suits is the trump suit. The game value for a suit game is calculated as follows: Game value = base value x multiplier game level

The base value depends on which suit is the trump suit:

The multiplier game level starts at 1, and can be increased in various ways:

In a grand game, only the Jacks are trumps. The game value is calculated as follows: game value = 24 x multiplier game level

The multiplier game level is calculated similarly as in a suit game.

In a null game, the declarer tries to avoid taking any tricks. The game values are as follows:

Note that it is also possible that three players pass, in which case the next player shuffles and deals. A player never deals twice in a row.

The player with the highest bid becomes the declarer. The other two players will form a team and play against the declarer. The declarer should now do two things. First, decide whether to pick up the Skat or not. If the Skat is picked up, it should be combined with the player’s hand, and two cards should be put back face down on the table. Secondly, the declarer should decide on the game type (suit, grand, null) and in the case of a suit game, announce the trump suit. Additional announcements can be made (Schneider, Schwarz, and Ouvert).

The player to the left of the dealer leads the first trick. The game is played clockwise. Players must follow suit if possible, i.e. play a card of the same suit as the first card in the trick. Note that the trump suit includes all four jacks in a suit or grand game. The player with the highest card in the trick wins the trick and can lead the next trick. Note that a trump card, irrespective of its rank, wins against any other suit. Playing is continued until all cards have been played.

To win a game, the game value must be high enough (higher than the bidding value), and in the case of a suit or grand game, the declarer must have scored enough points.

If the game value is not high enough (an overbid hand), the declarer will receive a negative score. This negative score is calculated by doubling the lowest possible game value that is a multiple of the base value of declarer's suit (or 24 in case of a grand) which is at least as high as declarer's bid.

If the game value is high enough, the declarer must have at least 61 points in his tricks (including the Skat) to win a suit or grand game. Each rank has a different point value:

To win a null game, the declarer should not have won any trick.

The score the declarer receives (either positive if won or negative if lost) is the game value. When lost, the score is doubled and subtracted from the declarer’s points.

The game ends when a certain amount of rounds is completed. This amount is agreed on before starting the game. The player with the highest combined score over all rounds wins.

Skat can be played in all modern browsers, on all device types (desktop, tablet, mobile), and on all operating systems (Windows, macOS, Linux, Android, iOS, ...).

Please let me know why you don't like Skat