Schnapsen is a fun trick-taking card game for 2 players, the national card game in Austria. 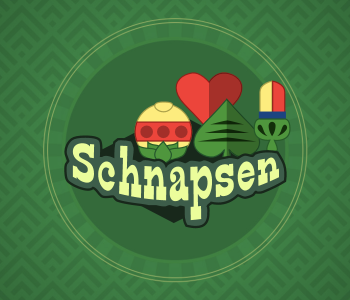 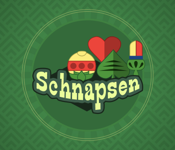 Schnapsen is played with 2 players, using 20 cards from a German-suited deck. The game is played in alternate direction (clockwise and counter-clockwise). A game takes between 5 and 10 minutes. The most closely related card game is 66 (Sechsundsechzig).

Schnapsen is played with 20 cards from a German-suited deck. You can use the following correspondence between German-suited and French-suited cards:

The Forehand starts with the first trick. It is not yet required to follow suit at the start of the game. The card ranking is Deuce - 10 - King - Ober - Unter. A trump card wins from any other card from a non-trump suit. The winner of the trick takes the cards with him, and draws a new card from the stock. The other player also draws a card from the stock so both players have 5 cards again. The winner of the trick can start the next trick.

When a player has the trump Unter (trump Jack) he can exchange it for the face-up card in the middle, before playing a card in the trick.

When a player has 66 points or more after winning a trick or announcing a marriage, he can go out (ausmelden). The game ends immediately.

When a player has a King and Ober (King and Queen) of the same suit in his hand, he can announce them in his turn. One of the two cards must be played in the next trick. A trump pair counts for 40 points (royal marriage). A pair of non-trump cards counts as 20 points. Note that a player needs to win at least 1 trick before these points actually count.

If a player went out but it turns out he actually didn’t have 66 card points or more, the opponent wins the amount of points the player would have got if he had been right.

If none of the players reaches 66 card points, the last trick decides who wins. The winner gets 1 game point.

If the stock was closed and the player achieves 66 card points or more, the score is based on the card points at the moment the stock is closed:

Both players start with 7 game point, and subtract the game points they win. The first player to reach zero or lower wins.

Schnapsen can be played in all modern browsers, on all device types (desktop, tablet, mobile), and on all operating systems (Windows, macOS, Linux, Android, iOS, ...).

Please let me know why you don't like Schnapsen