One of the most popular games in Switzerland, played with special Swiss-suited cards. 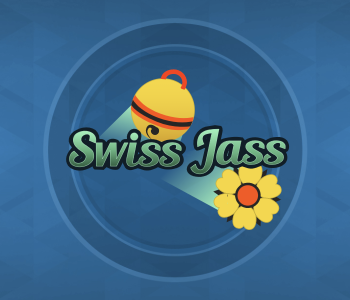 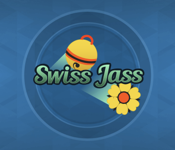 Jass (or Swiss Jass) is a popular card game in German-speaking Switzerland and other Alemannic-speaking regions such as Liechtenstein, Vorarlberg, Baden-Württemberg and Alsace. The origin of Jass is the Netherlands. It is a trick-taking card game.

Jass has several variations. The most commonly played variation and also the one we feature here on our website is Schieber.

Schieber Jass is played with 4 players, using 36 cards from a Swiss-suited deck or a Swiss-French suited deck. The game is played in counter-clockwise direction. A game takes between 45 and 60 minutes. Jass is closely related to Klaverjassen and Belote.

How to play Schieber Jass

Jass is played with 36 cards from a Swiss-suited or Swiss-French suited deck. The cards used are the Ace, King, Queen, Jack, 10, 9, 8, 7, and 6 from each of the 4 suits. You can use this correspondence between the suits:

Next to one of the 4 suits, a player can also make two other bids: Tops-down (Oben-abe) and Bottoms-up (Unden-ufe). These are played without trump and have a different ranking of the cards (see below).

The scores for these match types have different multipliers:

In a normal game, the cards are ranked as follows from highest to lowest, and have card points indicated between brackets:

Each player is dealt 9 cards, 3 times 3 cards. The dealer deals counter-clockwise. The next hand, the player to the right of the dealer must deal the cards.

The player holding the 7 of Bells (Schellen) starts the first trick. This person is called the eldest. Each player plays one card, in counter-clockwise direction. The winner of a trick can lead the next trick. The trick is won by the player with the highest card of the suit led, or by the highest trump if any are played. If trump is played as first card, following suit is mandatory except if your only trump is the trump Jack. If a non-trump is played as first card, players must follow suit or play a trump card.

If a player holds the King and Queen of trumps, he can claim a marriage.

A player can also earn points with melds, which are in-suit sequences of 3 or more cards or 4 cards of the same rank (A, K, Q or 10 only). A card can only be used in one meld at a time. Combining marriage and meld is possible. Scoring for melds is as follows:

When playing the first trick, each player announces their best meld. Only the player with the best meld scores points. The best meld is determined by its points value first, and if there is equality by length of the sequence, starting rank of the sequence, whether sequence is in trump and player position.

Points are earned from tricks, marriages and melds.

Points for tricks are all card points for the cards in the tricks won, with card points as described above. Winning the last trick scores 5 extra points.

The scores of the melds are indicated above.

The first team reaching the target score wins. The game stops immediately when this score is reached.

Jass can be played in all modern browsers, on all device types (desktop, tablet, mobile), and on all operating systems (Windows, macOS, Linux, Android, iOS, ...).

Please let me know why you don't like Jass