Sueca is the national card game of Portugal. Play this 4 player game with computer opponents. 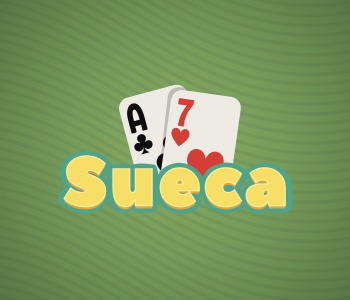 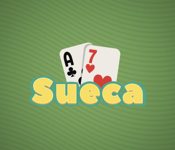 Sueca is a trick-taking card game from Portugal. It is the most popular card game in Portugal, and is also very popular Brazil, Angola, Mozambique, Goa and Macau.

Sueca is played with 4 players, using 40 cards from a French-suited deck. The game can be played clockwise or counter-clockwise. The main skill required for Sueca is tactics. There is a low to moderate random chance involved in the game. A game takes around 15 minutes to play. Sueca is related to the German card game Einwerfen and the Italian card game Briscola.

How to play Sueca

Sueca is normally played with four players, in two partnerships (teams) of two players. The players sitting across from each other are in the same team.

Sueca is played with a French-suited deck of 40 cards, by removing the 8s, 9s and 10s from a regular 52 card deck.

The goal in Sueca is to earn the majority of card points by winning tricks with valuable cards.

Each player is dealt ten cards, all in one go. The dealing and playing direction can be either counter-clockwise or clockwise. The last card which is dealt and hence belongs to the dealer is turned up and determines the trump suit for the hand.

The player to the right of the dealer (or left if playing clockwise) leads the first trick.

Following suit is mandatory. Playing a trump is only allowed if a player doesn’t have any cards from the lead suit.

After all ten tricks have been played, each team calculates the total value of the cards they won during the game. The team with the highest value wins the hand.

The total value of a deck is 120 points, so the team scoring 61 or higher wins. If both score 60, none of the teams gets a point. If a team scores 91 or more points it gets 2 points. If a team wins all tricks it gets 4 points.

The first team to win four points wins the game.

Sueca can be played in all modern browsers, on all device types (desktop, tablet, mobile), and on all operating systems (Windows, macOS, Linux, Android, iOS, ...).

Please let me know why you don't like Sueca