Belote is the national card game in France. Play it against computer opponents. 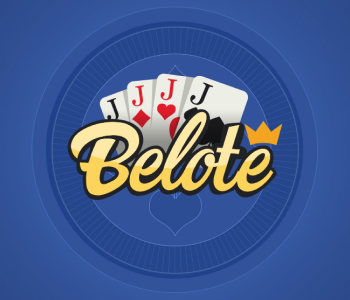 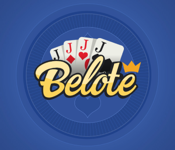 Belote Classic is a trick-taking card game from France. It is the national card game in France, and also played in Armenia, Bulgaria, Croatia, Cyprus, Greece, Luxembourg, Moldova, North Macedonia and Saudi Arabia.

Belote is played with 4 players, using 32 cards from a French-suited deck. The game is played clockwise. The main skills required for Belote are card counting and strategy. A game takes 30-45 minutes to play. Belote has popular variations (e.g. Belote Coinchée and its Bulgarian variation Belot) and is closely related to the Dutch game Klaverjassen.

How to play Belote

Belote is played with four players, in two partnerships (teams) of two players. The players sitting across from each other are in the same team.

The ranking and the card value are different between trump suits and regular suits.

The goal in Belote is to earn more points than the other team by winning tricks with valuable cards and declaring certain combinations of cards.

Each player is dealt five cards, first three cards for each player followed by two more cards. The dealing and playing direction is clockwise. The next card in the deck is turned up. Note that the pack is never shuffled in Belote.

There are two rounds of bidding possible.

In the first round, starting with the player to the left of the dealer, each player can either take or pass. Taking means choosing the face-up card as trump. If all players pass, the second round starts.

In the second round, each player can again take or pass. This time, they are free to choose a trump suit, but it must be different from the suit of the face-up card.

Bidding ends as soon as someone takes, and this player gets the face-up card. Each player is dealt three additional cards, except the taker who gets two additional cards.

The player to the left of the dealer starts playing.

Following suit is mandatory, and it is also mandatory to try to win the trick:

Next to earning points by winning tricks, players can also earn points by declaring certain combinations of cards.

The first type of declaration is four cards of the same rank. This is called square (carré in French).

The third type of declaration is belote-rebelote. If a player holds both King and Queen of the trump suit, he may declare belote. This earns 20 points.

Note that in our version you can decide to play Belote with or without declarations.

After playing all 8 tricks, both teams calculate the points of the cards in the tricks they won. The winner of the last trick earns 10 points (dix de der in French).

The team of the taker must score more points than the other team to fulfil their bid. The total amount of points (except declarations) is 162. This means 82 points are needed to fulfil a contract (besides declarations). If the team of the taker fulfils their bid, each team notes their points, otherwise the opponent receives all 162 points. If a team wins all 8 tricks (Capot in French), they get an additional 90 points, so 252 points in total.

Belote can be played in all modern browsers, on all device types (desktop, tablet, mobile), and on all operating systems (Windows, macOS, Linux, Android, iOS, ...).

Please let me know why you don't like Belote