Simple and clear version of the ancient board game Mancala for two players. Use your strategic skills to put more gems in your bank than your opponent. 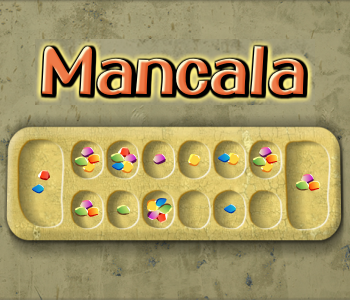 The goal in Mancala is to plant the most seeds (gems) in the bank (the rightmost store, also called mancala).

The game board consists of two rows of six holes, and on each side a bank. Your pits are at the bottom of the board, and your bank is at the right of the board.

The gems come in various colors, but the color doesn’t impact the gameplay.

Four gems are placed In each of the six player’s pits, so totalling 24 gems on a player’s side and 48 gems in total.

The players take turns, picking up all gems in a pit on their side of the board and distributing them one by one to the next pits in counterclockwise direction. This action is called sowing.

If the last gem of a player’s move is placed in a player’s Mancala, they can play again.

If the last gem of a player’s move is placed in an empty hole on their side and there is at least one gem in the pit on the opposite side of the board, the gems in the two pits are placed in the player’s bank.

The game ends when the pits of one of the players are empty. The other player can add the gems that remain on their side to their mancala. The player with the most gems in their bank wins.

Mancala can be played in all modern browsers, on all device types (desktop, tablet, mobile), and on all operating systems (Windows, macOS, Linux, Android, iOS, ...).

Please let me know why you don't like Mancala